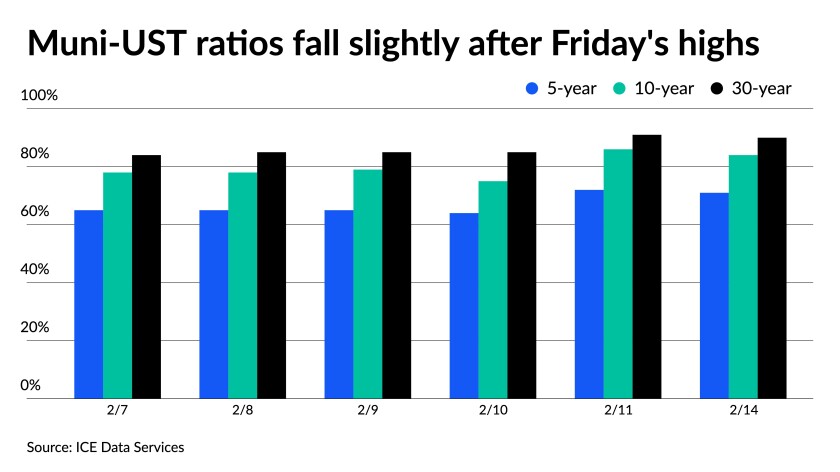 “The pace and magnitude of fund flows will likely dictate muni performance from here,” he said. “Deals pricing earlier in the week had a better reception, with those pricing later in the week finding it more difficult to find buyers due to the selloff.”

Block said investor bids wanted in competition remained about double normal levels, highlighting the hangover from the previous week’s large fund outflows, despite trading throughput falling to 18% above average from 50% the week before due to the lower relative value of high grades. MMD Refinitiv saw average decreases of 18 basis points throughout the curve, with the 20-year at 1.87% and the 30-year at 2.03%.

“However, amidst the negative indicators, there has been selective buying,” said Pat Luby, CreditSights’ senior municipal strategist. “Net flows into municipal bond ETFs have been positive for the last two calendar weeks — although investors have been favoring low-duration strategies — and the total par amount of customer buy trades has continued to outweigh sell trades, although the net total was down from the prior.”

But while the net total decreased from the previous week, the total par amount of customer buy trades continue to outnumber sell trades, he said.

Further, he said while the current secondary market supply of variable rate demand notes is larger than the daily average from last year, it has decreased from the recent peak on Feb. 1.

Luby said the market is anticipated to underperform because of the dangers of an imbalance between muni demand and supply. While he predicts increased mutual fund outflows due to underperformance and volatility, he also expects taxable investment grade investors to demand tax-exempts if/when the relationship between tax-exempt muni yields and corporate yields is at least break-even or favors tax-exempts.

Last week, he said that link drew even closer — not near enough to signify imminent value, but close enough to warn taxable bond investors of the possibility of additional underperformance in the tax-exempt market.

“If this week’s new issues get priced at a concession to the market, there could be an opportunity for investment grade investors to add muni credit risk to their portfolios at yields that are comparable to corporate bond after-tax yields,” Luby said.

He said investors will get $11.7 billion on Tuesday from bonds expiring or being called, which might increase demand this week. Taxable bonds will account for $1.3 billion of the total amount.

Principal payments are scheduled to reach $34.2 billion in February, $20.8 billion in March, and $15.4 billion in April. Redemptions will begin to rise in May, with $19.4 billion predicted, followed by $39.8 billion in June, which is likely to be the year’s highest monthly flows, he said.

For muni bonds specifically, there was a decrease in request volume of 14.2% month-over-month, but they are up 2.3% on a year-over-year basis.

“There is always some seasonality reflected in CUSIP request volumes for January, but when we look at the data over the long-term historical average, we’re seeing a strong start to 2022,” said Gerard Faulkner, direct of operations for CUSIP Global Services. “Right now, the bet on rising rates can be seen in year-over-year volumes for certificates of deposit. It will be interesting to see how this trend shapes up as the Fed prepares to raise interest rates.”

Treasuries were weaker while equities ended in the red.

The January survey of consumer expectations showed respondents see inflation running at a 5.8% on a one-year horizon, down from 6.0% a month earlier, while inflation is expected at a 3.5% rate in three years, down from 4.0% last month, the Federal Reserve Bank of New York said.

Researchers found that consumers have changed their views on inflation, with some “short-term movements in inflation expected to persist into the future,” a New York Fed blog post said.

But, economists now believe inflation will begin moderating in the last half of the year.

Jay Hatfield, chief investment officer at ICAP, pointed to energy and rent costs as indicators that inflation will remain elevated. “We continue to believe that the Fed will tighten monetary policy gradually in 2022 through four rate increases spread throughout the year and modest reduction in the balance sheet,” he said.

While the market and other economists see more hikes this year, with expectations growing every day it sees, Hatfield noted, “President Biden will have appointed five of seven Federal Open Market Committee members when his nominees are approved, which implies a more dovish Fed.”

Additionally, monetary policy works with a lag, and financial conditions are already tightening in preparation for Fed action, he said. “In addition, the Fed has recently focused on its dual mandate of maintaining employment and moderate inflation vs. its prior sole focus on its ill-advised 2% inflation ceiling.”

Once the 10-year Treasury yield hits a bottom (somewhere around 2%), Hatfield said, equities will stabilize. “The current rate is 1.986% implying that we may be close to finding a stable level for long term rates,” he said.

KC Mathews, EVP/chief investment officer at UMB Bank, noted, “The slope of the yield curve now below 50 bps will trigger some conversations.”

In the current cycle, he said, things are “happening much sooner than any other historical experience,” pointing to the yield curve flattening “before the Fed even executed the first move.”

But, the bond market suggests a terminal rate around 2%-2.25%, and “the inflation story will abate by then and the curve will be flat,” Mathews said

“More moves in 2022 are certainly ,a fair consideration, but the bigger question is where it stops,” he continued. “In other words, we don’t believe the bond market is signaling an impending recession, but rather a soft landing after a fairly moderate tightening cycle.”

The proof, Mathews is the 10-year yield. “If the market thought inflation was going to run away and the Fed would be chasing it way above a 2.00% fed funds rate, why would the 10-year stay at 2.0%?” he asked. “We believe the 2-year is making room for a front-loaded set of moves from the Fed, at this time we are expecting four-five hikes, and the 10-year is telling us that the tightening cycle will end around 2.0%.”