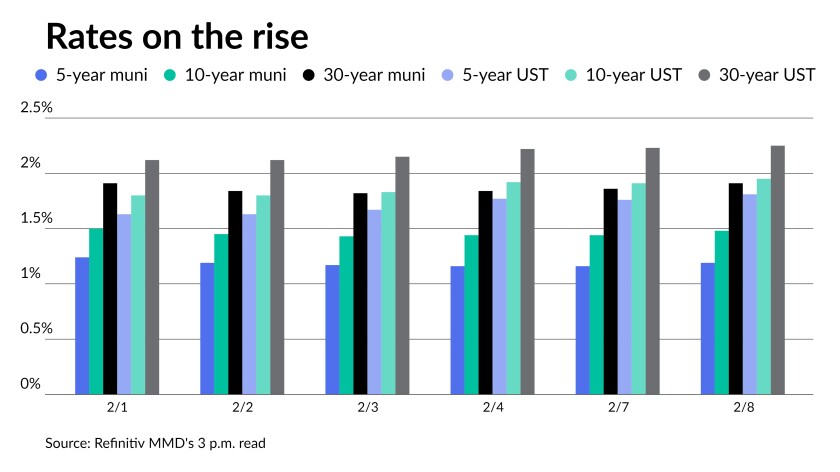 Municipals were weaker Tuesday amid another spike in U.S. Treasury yields while equities rallied.

“However, it appears as though the market overshot itself and is in the process of trying to find a new range that meets both buyers’ and sellers’ objectives,” she said.

Early in February, she said a cautious commitment theme has emerged, with all other factors influencing broad yield direction — muni fund flows, supply, redemptions, and the Federal Open Market Committee — still in play. The back half of the muni curve has been more volatile since February started with a nominal trend up in yield based on where January’s yields closed out, Olsan said.

She said implied triple-A yields past 2035 have driven a 10 basis point flattening in this range, putting the curve slope around 120 basis points. Trade flows in recent days suggest to higher volume outside 12 years — MSRB statistics show this range has accounted for 53% of secondary activity, with a portion of that coming through swap transactions.

Credit has widened in response to changes in absolute yields.

Aside from the largest rate increase in five years in January, Olsan said the credit curve is widening across the yield curve. On the short end, double-A-rated revenue bonds were around +5/AAA in late December, but the margin is currently +9/AAA. The 5-year spread in single-A revenues has increased to +14/AAA, up from +10/AAA at the end of December.

Out long, Olsan said credit spreading in both double-A and single-A revenue names is more evident in the 20-year range.

Treasury yields were weaker while equities ended in the black.

Speculating on Fed
While analysts expect a Federal Reserve rate hike at its March meeting, no consensus exists what happens after that.

Most see the Fed being aggressive, but some don’t.

After the taper tantrum, the Fed has tried not to surprise the markets, noted Drew Peterson, vice president and research analyst at Appleton Partners. While he sees a 25-basis point hike at the March meeting, Peterson said “the market has likely gotten ahead of itself by responding to current conditions rather than expectations and we feel that by the second half of the year the case for continuing beyond an initial few hikes will have weakened.”

Fed officials speaking about data dependence “seems to be tacit recognition of that,” he said.

And while annualized consumer price index readings “will remain elevated for some time,” Peterson added, “the monthly series should start moderating over the next several months regardless of Fed policy.”

The plunge in retail spending in December is “a primary reason we expect inflation to slow,” he said. “Surging spending earlier in Q4 had been widely interpreted as post-pandemic consumer demand, although we were more inclined to view these two months as front-loaded holiday shopping driven by supply chain concerns.”

If this is accurate, Peterson said, “early Q4 strength in consumer demand is unlikely to persist.”

Also, gross domestic product’s stronger-than-expected fourth quarter number was fueled by inventory building, which, he said, “cannot continue indefinitely.” Also, “after an extended COVID-influenced inventory drawdown, replenishment is the strongest sign yet that the bottlenecks that have fueled inflation are easing.”

But David Kelly, chief global strategist at JPMorgan Funds, thinks 25-basis point rate hikes every quarter through 2023 and aggressive balance sheet reduction beginning in July “would have the best chance of maintaining an upwardly-sloping yield curve and allowing for a gradual return to positive real rates across all Treasury maturities. This would gradually reduce excess demand in the economy and, importantly, reduce incentives for financial speculation.”

But, he noted, “Fed messaging on this issue is frankly worrying,” pointing to Federal Reserve Board Chairman Jerome Powell’s comments that the Federal Open Market Committee will use the funds rate target as its primary monetary policy tool.

“If the Fed is more aggressive and unpredictable in raising the federal funds rate it runs the risk of destabilizing financial markets,” Kelly said. “This could make it more reluctant to engage in aggressive balance sheet reduction. This, in turn, could lead to a flatter yield curve and concerns that the economy could slow down too much in 2023.”

If inflation falls, but remains above the Fed’s 2% target, he said, “it is doubtful that the Fed would have the fortitude to continue to battle inflation in the face of public or political pressure to ease policy,” while will impede “any scenario leading to much higher long-term interest rates.”

Kelly said, investors need to be aware “that if, because of Fed impatience, rates rise more rapidly over the next year, there is a considerable risk of a subsequent relapse as the Fed abandons its new-found and still shaky inflation-fighting resolve.”

“Year-over-year inflation numbers should ease somewhat over the summer as supply issues diminish and a lack of federal government aid constrains consumer spending,” Kelly said. “However, still elevated wage growth along with strong gains in owners’ equivalent rent and higher inflation expectations overall may prevent core consumption deflator inflation from falling below 3% throughout 2022 or 2023.”

In data released Tuesday, small business optimism slipped, while 22% of small business owners surveyed said inflation was their biggest concern, according to the National Federation of Independent Business.

The net percentage of respondents that expect the economy to improve in the next six months was up slightly to a negative 33% reading.

Inflation is causing this pessimism, said Wells Fargo Securities Senior Economist Mark Vitner. “The NFIB survey was one of the first economic indicators to signal that inflation would prove to be far more menacing than the Fed or most private forecasters had been projecting,” he said.

This month’s report implies “inflation will get worse before it gets better,” Vitner said. And even when inflation subsides, he said, “it will likely pressure business operating margins, which is a reason why such a large proportion of business owners remain pessimistic about the near-term economic outlook.”

Separately, the U.S. trade deficit widened to $80.7 billion in December from $79.3 billion a month earlier, on growing imports as businesses restocked inventory.

Competitive:
The University System of Maryland is set to sell $23.95 million of auxiliary facility and tuition revenue bonds, 2022 Refunding Series B, at 10:45 a.m. eastern Thursday.

The University System of Maryland is set to sell $97.64 million of auxiliary facility and tuition revenue bonds, 2022 Series A, at 10:30 a.m. Thursday.