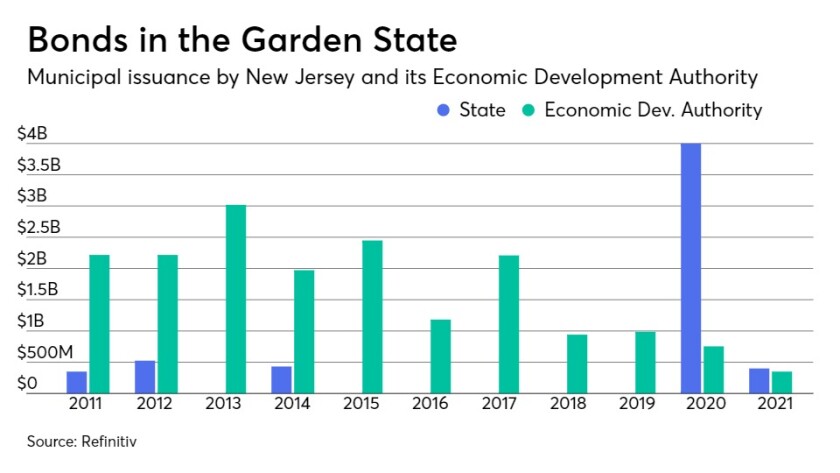 New Jersey has followed through on plans to use its budget surplus to trim its debt load.

More than $3 billion in principal and interest on New Jersey bonds has been retired, the state Department of the Treasury said on Thursday.

New Jersey allocated $3.7 billion in the state’s fiscal 2022 budget to cut outstanding debt. About $2.5 billion was earmarked for defeasing existing debt while $1.2 billion was allocated to support capital construction so as to avoid issuing new debt.

Between Nov. 15 and Feb. 1, eight separate bids were made to purchase U.S. Treasury securities using the $2.5 billion available for debt defeasance in the Debt Defeasance and Prevention Fund the budget authorized and funded.

The defeased bonds had a total debt service cost of $3.107 billion over their remaining life, including principal and interest. All of these defeased bonds were moved off the state’s balance sheet when the purchased Treasury securities were placed into escrow.

Among states, only Illinois has lower ratings.

Moody’s S&P and Fitch all lifted their rating outlooks to positive in the summer and Kroll revised its outlook to positive Jan. 7.

The state Treasury’s Office of Public Finance along with the state’s financial advisor, bond counsels and the Attorney General’s Office, conducted the transactions.

Since 2011, the state of New Jersey has sold about $5.7 billion of bonds, with the most issuance occurring in 2020 when it offered $3.997 billion to help mitigate costs associated with the COVID-19 pandemic. The state ranked 12 in debt issuance nationally last year, with issuers in the Garden State selling $9.89 billion of debt in 2021.

“This was an extremely complex undertaking and our Office of Public Finance, along with the other professionals involved, deserve to be commended for both their diligence and expediency throughout this process,” state Treasurer Elizabeth Maher Muoio said in a statement.

“At the end of the day, we have substantially reduced our debt load while securing real savings for the taxpayers of this state,” she said.

Measured against the cost of purchasing the securities, the net savings to the state is $607.2 million over 10 years, according to the Treasury.

After the $1.2 billion that has been appropriated to fund capital construction on a pay-as-you-go basis, this debt issuance avoidance will save the state about $2.2 billion when compared to the cost of selling bonds to fund the projects, Treasury said.

The OPF estimates that in the long-term the fund will ultimately save $5.31 billion in total costs.

“Paying down debt will relieve some of the pressure on taxpayers and free up funding to invest in the things that matter, proving that we can place a premium on fiscal responsibility without sacrificing our values,” Gov. Phil Murphy said in a statement.