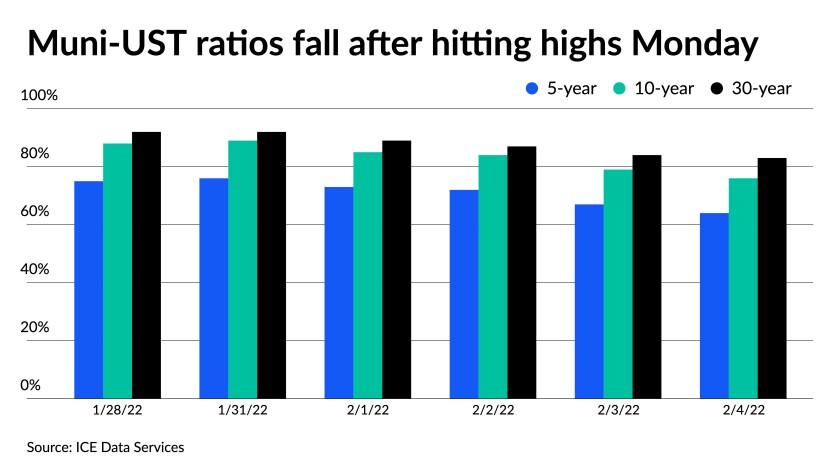 Municipals were slightly weaker, particularly on the long end, but the asset class outperformed a selloff in U.S. Treasuries after a stronger-than-expected jobs report.

“The inflation battle for the Fed and their monetary policy will be a big challenge,” said John Farawell, managing director and head of municipal trading at Roosevelt & Cross. “As always, watch the yields and Treasury slope as the market interprets the Fed’s future plans.”

Municipal to UST ratios hit highs to start the week after muni yields rose substantially throughout January. The 10-year muni to UST ratio reached 87% and the 30-year rose to 94%, both of which were last seen before the November 2020 election, according to BofA Global Research. This created entry points for buyers to return to the market even as ratios fell on the week following these highs. Indeed, muni yields fell in the first three sessions of February.

“This suggests that, besides a hawkish Fed and high Treasury rates, the disappearing fear of higher tax rates may have also played a factor,” they said.

They said the agenda was drastically reduced from the original proposal, and just $550 billion of physical infrastructure spending has been approved thus far via the Infrastructure Investment and Jobs Act. The Build Back Better Plan, the “social half” of Biden’s agenda, has not progressed. Sen. Joe Manchin stated Tuesday that it was “dead,” and that any discussions about restoring important portions of it would have to start over, they noted.

If higher tax rates are not on the table this year, BofA said muni-Treasury ratios will confront a similar situation to that of 2018, with a highly active Fed and robust GDP growth, while inflation is considerably higher this year and Treasury debt has climbed by $6.5 trillion compared to 2018. According to BofA economists, the Fed will raise rates seven times this year, resulting in 3.6% GDP growth. For years to come, these variables will keep the prospects of rising tax rates in the picture.

“As such, ratio ranges should be lower than in 2018 and 2019,” they said. “Absent a market dislocation like March 2020’s, high ratios seen this Monday are extreme and should be considered a good opportunity for tax-exempt investors.”

Following Fed-induced rate hikes, tax-exempt yields will likely follow, and muni-Treasury ratios may also underperform if rates rise, according to Barclays strategists Mikhail Foux, Clare Pickering and Mayur Patel in a Friday report. While they anticipate that muni volatility will persist, they said it is not muni-specific and the asset class is merely adjusting to a more equitable yield environment.

“At this point, the market seems to have realized that higher taxes will not materialize … while additional help for state and local governments also is highly unlikely,” they said. “Hence, muni yields are simply adjusting to a more normalized regime, in our view.”

Municipal bonds are still very inexpensive compared to Treasuries, despite muni-Treasury ratios having fallen from recent highs, the Barclays report said. After trading at a discount in late January, the NAVs of liquid muni exchange-traded funds have likewise swung back into positive territory, indicating the muni market is regaining its footing, they said.

“The muni market is still not out of the woods, and we expect volatility when the Fed actually starts tightening as early as next month,” they said. “However, a lot has been priced in already and, while not chasing the yields lower, investors should be opportunistic and continue adding on market weakness.”

Although the muni market dislocations this year have been severe, Barclays strategists are not concerned in the long run. Municipals have been under pressure several times in the last 15 years, practically all of them triggered by rate selloffs, but only in the most severe episodes has rate volatility been paired with municipal credit, they said.

Slow issuance is one of the reasons why the muni market hasn’t been subjected to additional pressure.

January is normally one of the slowest months of the year, and total and net issuance in the first month of 2022 was lower than usual, owing to market volatility.

They said lower supply helped the market regain its footing more quickly, but issuance is expected to build up in the coming months. However, the new-issue calendar for the upcoming week is at $5.39 billion, down from this week’s $8 billion.

The largest deal of the week comes from the Port of Portland, Oregon with $511.35 million. Other notable deals include a taxable refunding for the state of Ohio, the Orange County Health Facilities Authority, Greater Orlando Aviation Authority and Arlington Independent School District, Texas.

Washington brings $740 million of competitive GO loans on Tuesday while the Las Vegas Valley Water District and the University Systems of Maryland round out the competitive calendar.

Another surprise
After almost two years of pandemic conditions, the economy continues to challenge predictions, even day-by-day. When the ADP report disappointed on Wednesday, many analysts wrote off the employment report, which was expected to be weakened by Omicron impacts, and suggested it would have no meaning for the Federal Reserve.

Fast forward to Friday and a stronger-than-expected nonfarm payrolls gain and talk of a 50-basis point rate hike resurfaced.

“The job reports had been dismissed as inconsequential due to Omicron’s effect on the labor force number,” Farawell said. “Next week’s CPI release was supposed to be more important to the Fed’s plans for future rate hikes,” but said the payrolls report changed the conversation.

The report “certainly offers additional justification for the Fed’s new more hawkish stance as well as a welcomed data point ahead of the Committee pulling the trigger on a removal of pandemic-level accommodation potentially just 40 days from now,” said Stifel Chief Economist Lindsey Piegza.

The data “raise the possibility of going 50 at the March meeting,” said Jeffrey Cleveland, chief economist at Payden & Rygel. “The Fed seems to be way behind the curve at the moment. When you compare current readings on the unemployment rate, prime age labor force participation rate, wage growth, core PCE, trimmed mean PCE — all the readings are higher now than they were when the Fed reached ‘terminal’ fed funds of 2.50% in the last cycle.”

Before the report, he said, the bond market was pricing in five rate hikes in 2022 and a terminal rate near 1.70%. That’s too few increases and too low a rate. “We think it should be closer to 2.50%.”

The numbers “made some investors nervous” because it could force the Fed “to be much more aggressive” in its fight to curb inflation, said Edward Moya, senior market analyst at OANDA.

“The Fed clearly is rushing to fix their mistake in tackling inflation and that surging global bond yield environment will make it tough for risky assets,” he said. “Selling into rallies may not become the dominant theme, but it is hard to imagine investors will be aggressively bullish here.”

After Wednesday, weakness in the report was expected, Moya said, “instead we saw robust hiring, higher wages and more Americans returned to the workforce. Treasury yields skyrocketed alongside the dollar following the impressive labor report that will fuel into the inflationary theme that is driving markets.”

Inflation data will still determine the Fed’s action. “With a couple hotter inflation reports coming before the March FOMC meeting, the base case is quickly becoming for the first-rate hike to be a half-point interest rate increase,” he said.

While the report confirms a march rate hike, said Marvin Loh, senior macro strategist at State Street Global Markets, “we do not think the Fed will come out of the gate with a 50-bps hike.”

But, he noted, “the market is likely to try and push that narrative.”

With one more jobs report due before the March 15-16 meeting, Loh said, expect the Fed to “remain non-committal to a 50-bps hike until it gets more data. Given that the Fed thinks that it is behind the curve, liftoff is likely to be followed by a few successive rate hikes.”

If the labor participation rate continues to increase, he said, “wage pressures will start normalizing and it may give the Fed a reason to pause going into the second half of the year, which may require less rate hikes than currently expected.”

Besides reaffirming “the strength of the U.S. economy,” the numbers show “the economy is becoming quite resistant to new variants of COVID-19,” said Ron Temple, head of U.S. equities at Lazard Asset Management. “A hike in interest rates in March is practically a done deal.”

But the 0.7% rise in average hourly earnings in the month and the 5.7% gain year-over-year “will cement the Fed’s recent hawkish turn,” said Brian Coulton, chief economist at Fitch Ratings.

Throw in wage growth at a 6.9% annualized pace over the past three months and it “flags a warning that wages are responding to high and rising inflation as well as a tight labor market,” said David Riley, chief investment strategist at BlueBay Asset Management.

Although it’s too early to tell if more pay will get people back in the workforce, ING Chief International Economist James Knightley, “the narrative of intensifying labor market inflation pressures and strong employment growth when Omicron is supposedly depressing activity only makes it more likely that the Fed will embark on an aggressive series of interest rate increases.”

While he says a 50-basis point hike in March is “doubtful,” the Fed will likely raise by 25 basis points five times in 2022.

The wage gains, combined with the job increases, fuels “the inflationary ‘wall of worry’,” said Matt Peron, director of research at Janus Henderson Investors. “As a result, fears of the Fed being forced to act more urgently could come back to the fore.”

The first half of the year is likely to be “choppy,” he said, “and we are not out of the woods yet.”

But the employment report “is a little complicated than usual,” according to Chris Low, chief economist at FHN Financial. “In recent months, the attitude at the Fed flipped from strong jobs reports are good to strong job reports are bad because the Fed has decided the economy is at full employment. They fear there are not enough people to alleviate bottlenecks.”

And while the report is strong, given the jobs added, he said, it is not bad news because the participation rate climbed as well.

The Fed now has “a little more breathing room” in which to tighten policy, Low said. “The odds of quelling inflation without a recession look better today than yesterday.”

Throwing some skepticism into the mix, Christian Scherrmann, U.S. economist at DWS, suggests benchmark revisions were responsible for the surprise rise and the upward changes to recent months’ data. “The outcome of revisions of this kind can be quite unpredictable, especially in times of major external shocks — such as a pandemic — when the usual hiring patterns do not follow a historical well-known pattern,” he said.

The University System of Maryland is set to sell $23.95 million of auxiliary facility and tuition revenue bonds, 2022 Refunding Series B, at 10:45 a.m. eastern Thursday.

The University System of Maryland is set to sell $97.64 million of auxiliary facility and tuition revenue bonds, 2022 Series A, at 10:30 a.m. Thursday.