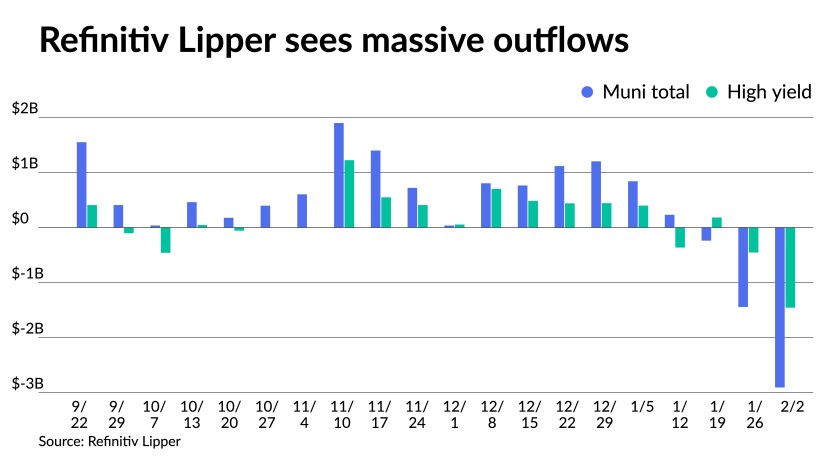 The last time outflows were above $2 billion was on April 8, 2020 when they hit $2.3 billion and prior to that was the massive outflows during the height of the COVID-led market chaos when $13.6 billion and $12.2 billion were pulled in mid- to late-March 2020. High-yield saw $1.456 billion of outflows in the latest week while exchange-traded funds saw small inflows.

A large flattening of the UST and muni yield curves have occurred since the beginning of the year.

“Investor anxiety and today’s market volatility is underpinned by the fear that inflation and higher rates, induced by the Fed, will slow the economy,” Bernardi said. “The Fed’s wind down of bond buying and communications about rate hikes, has mostly impacted the front end of the yield curve.”

Bernardi said long-term yields have not risen in lockstep with short-term rates. This is due, in part, to short-term rates being significantly impacted by Fed policy, and recent Fed communications have indicated that short-term rates would likely rise in the near future.

He said the spread between the 2-year and 10-year Treasury is unusually low relative to past economic cycles.

“In the current environment we are finding attractive valuations within tax-exempt and taxable municipal bonds,” he said.

He expects this ratio to trade between 70% to 80% and feels that a big increase is a buy signal for municipals in comparison to other high-grade fixed-income asset classes.

A limited supply forecast is another technical reason that current ratios should be maintained, he said. Refinancing bond issuance will become more challenging as interest rates rise and this will restrict the supply of new issues and support current ratios, potentially even lowering them.

The four-week moving average fell to negative $1.087 billion from negative $149.964 million in the previous week.

Treasuries were slightly weaker and equities sold off.

Economy
Economists are rushing to trim predictions for the employment report, with most expecting a loss related to Omicron, but certain it won’t delay the expected March liftoff.

“Omicron took a larger-than-expected bite out of the labor market in January with workers out sick and hiring plans put on ice,” said Morgan Stanley in a report. “We forecast a net payroll loss of 215,000, but strong household survey gains should help the Fed look through the headline as a one-off.”

Indeed, Mark Hamrick, senior economic analyst at Bankrate, noted, “January hiring may well be the weakest in a year as the Omicron wave sidelined millions of workers.”

Life during a pandemic leads to a “high degree of volatility and uncertainty,” he said. “If we continue to see more encouraging signs with COVID, it would be reasonable to expect the economic recovery will gather momentum again.”

The Fed has enjoyed “a free lunch,” said Jeff Klingelhofer, co-head of investments and portfolio manager at Thornburg Investment Management, “whereby they can stimulate and overstimulate the market without having to face the unfortunate consequence of excess and easy monetary policy leading to high and sustained inflation. But of course, the tides have shifted today.”

Much of the inflation as transitory, he said, but the Fed will soon “begin withdrawing its excess monetary policy, but over a relatively prolonged period.”

A bigger than expected 6.6% gain in nonfarm productivity, coupled with a smaller than expected 0.3% rise in unit labor costs offered a pleasant surprise, but with labor costs up more than 3% in the past 12 months, “cost pressures are still running ahead of the Fed’s 2% inflation target, even net of productivity growth,” said Wells Fargo Securities Senior Economist Sarah House.

Productivity gains will be less volatile in the coming year, she said. Given the issues with labor shortages, “businesses should continue to keenly eye labor-saving/enhancing investment given ongoing hiring difficulties,” House added. “The bump to productivity should help limit the extent to which higher labor costs are passed on to prices and offer a relief valve to current inflation pressures.”

The index signaled the slowest rate of growth since February 2021, said Scott Anderson, chief economist at Bank of the West, “suggesting the rapidly-spreading Omicron variant is limiting service sector activity.”

The decline to an 11-month low “reflects how a lack of available workers and persistent supply shortages are weighing on firms’ ability to keep up with activity in the service sector despite what is still a strong, if somewhat moderating, demand environment,” said Wells Fargo Securities Senior Economist Tim Quinlan and Economist Shannon Seery.