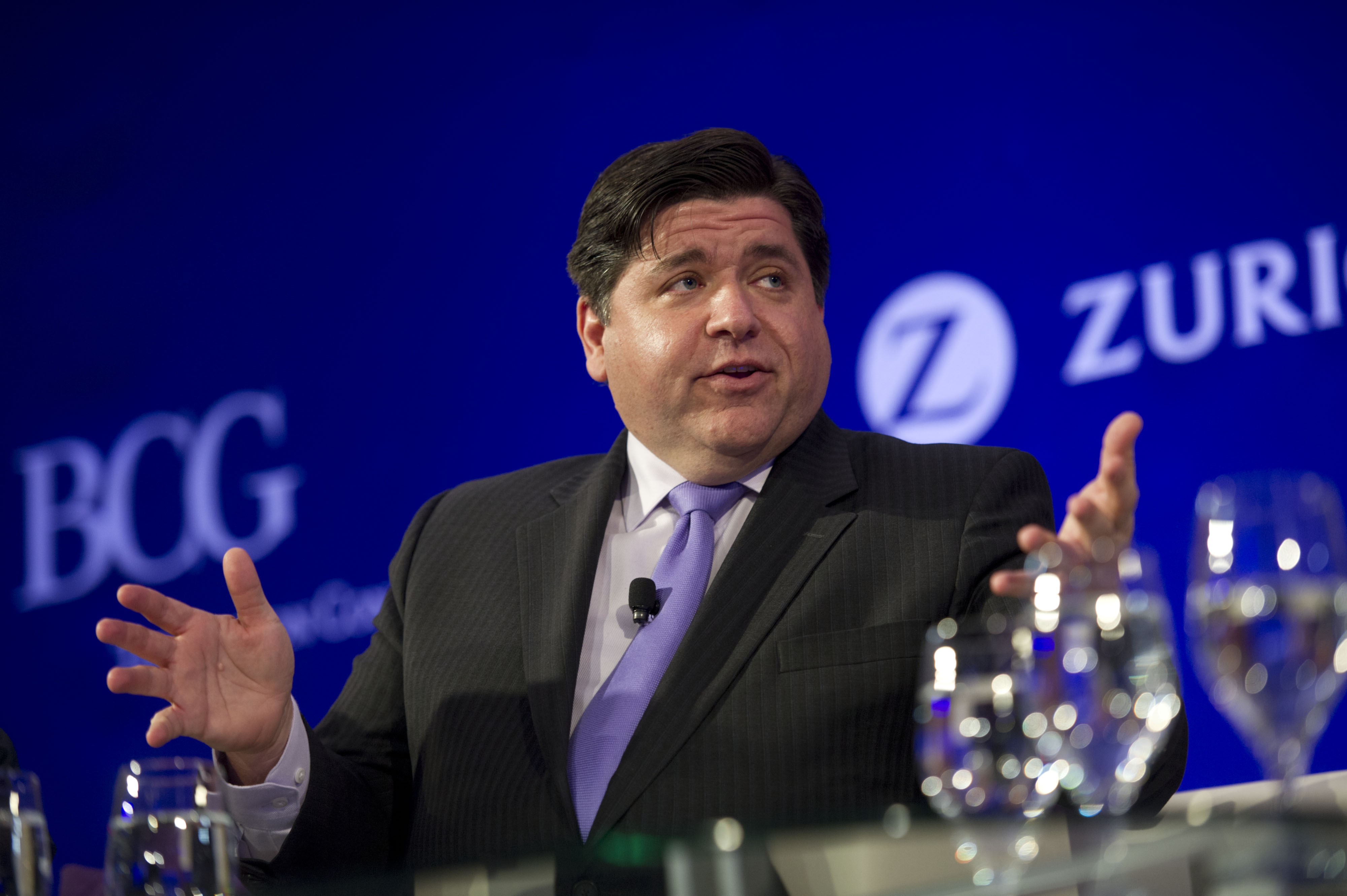 The state expects an additional $2.2 billion of revenue, about 5% of general funds, in fiscal 2022 and another $2 billion in fiscal 2023 over levels forecast just a few months ago and those November estimates already had put the state in stronger fiscal shape than forecast in June 2021.

The Democratic governor’s budget team is treating much of the windfall as a one-time infusion of revenue and trying to match it with non-recurring uses to avoid adding to the state’s ongoing structural gaps, which along with the state’s burdensome pension tab of $139.9 billion weigh heavily on its ratings, the lowest of any state.

Republicans quickly countered that the administration has added $2.5 billion in long-term spending to the state’s balance sheet.

“As we move on to tackle the questions of what vital current priorities our government should fund, know that we start from a place where our bills are paid, our most pressing short-term debts are nearly gone and our most critical long term financial liabilities are in the best fiscal shape they have been in since the turn of the century,” Pritzker said during a joint State of the State and budget address.

Pritzker is proposing a $112.5 billion budget package that includes a $45.8 billion general fund that spends $45.4 billion.

With its revenues on the mend from after initially plummeting early in the COVID-19 pandemic and $8 billion of American Rescue Plan Act cash in hand, Illinois last year reaped a series of positive rating actions that Pritzker touted in his speech Wednesday and uses prominently in his re-election campaign advertisements.

Unpaid bills and pensions
Pritzker would direct $898 billion through a supplemental appropriation with the fiscal 2022 surplus to retire remaining overdue employee/retiree health insurance bills that make up a piece of the state’s $3.58 billion unpaid bill backlog. Another $213 million of general bills would also be paid off in fiscal 2022.

The state would use a projected fiscal 2023 year-end balance of $179 million to further pay down the backlog leaving the accounts payable at $2.7 billion at the close of fiscal 2023, a low not seen in recent history and down from $9 billion in 2018 and a high of more than $16 billion in 2017.

Pritzker is proposing a $600 million deposit into the near-empty rainy day fund with the current year surplus, and another $279 million in fiscal 2023 with $79 million coming from legalized cannabis sales and $200 million from the general fund. That puts the state on track to end fiscal 2023 on June 30, 2023, with $879 million in the budget stabilization fund.

The statutory target of the fund is 5% of general fund revenues would be about $2 billion.

Illinois first established the rainy day fund in 2000 with a $226 million deposit from the tobacco settlement recovery fund. It received an additional $50 million infusion in 2004 but dropped to $125 million at the close of fiscal 2016 and was emptied in the following years.

At $879 million, the fund would remain modest compared to the multi-billion dollar accounts built up by Illinois’ neighbors that helped them manage the pandemic’s early toll, but it marks a reversal of course.

In addition to making the $9.6 billion certified pension contribution, Pritzker would funnel an additional $500 million in supplemental payments: $300 million this year and $200 million in fiscal 2023 through the state’s now empty pension stabilization fund.

The administration said it would result in a long term reduction in the overall liability by $1.8 billion. If approved, it would mark the first supplemental contribution to the pension fund since the legislature adopted the 50-year payment formula that’s designed to reach a 90% funded ratio in 2045.

The formula falls far short of an actuarially determined level but budget officials said the supplemental contributions get the state close to the so-called tread water level.

An ongoing buyout program funded with $1 billion of general obligation borrowing has reduced the liability by $1.4 billion, according to budget documents.

The state’s unfunded pension tab dropped in fiscal 2021 for the first time since 2017 and its funded health improved, propelled by investment returns that topped 20%. The gap stands at $139.9 billion for a funded ratio of 42.4%.

The budget also shores up the state’s troubled prepaid tuition plan by paying off a $230 million deficit in the amount needed to make good on contracts. That saves $75 million in future interest.

Pritzker would also direct a portion of the surplus to provide $1 billion in temporary tax relief that includes a one-year holiday on the 1% tax on groceries at a cost of $360 million to the state. The state will reimburse local governments for lost revenues due to the holiday. The state would forgo a scheduled increase in its motor fuel tax at a cost of $135 million. The relief also doubles an existing property tax rebate at a cost of $475 million.

Pritzker’s budget anticipates closing out fiscal 2023 with a $1.5 billion gap when counting various accounts payable on a budgetary accounting basis, but after subtracting carried over accounts payable the state would close the books with a $458 million balance on a cash basis. The state directs those funds to the rainy day fund and to further pay down bills.

The state also was able to fully pay off ahead of plan its remaining borrowing through the Federal Reserve’s Municipal Liquidity Facility. The state borrowed a total of $3.6 billion in two transactions and all was retired as of Jan. 26.

The revenue revisions Wednesday raise the fiscal 2022 forecast by another $2.2 billion and the 2023 projection by $2 billion. Overall, base general fund revenues fall in 2023 due to the infusion of federal dollars that boosted 2022 levels. Individual income taxes are projected to grow by 4.1% and sales taxes slide by 1.3 %.

The turnaround marks a sharp contrast to warnings in November 2020 that painted a grim picture with a $4 billion hole in the fiscal 2021 budget and projections of structural deficits between $4.2 billion and $4.8 billion lingering annually through 2027.

The state’s ratings began falling under former Gov. Pat Quinn, a Democrat, and further tumbled to one cut away from junk under Gov. Bruce Rauner, a Republican, whose battle with the Democratic legislative majority Illinois without an enacted budget for two years.

Critics say the state’s improving health is due to the infusion of federal dollars, while Pritzker counters that the new forecast doesn’t tap any federal revenues. Illinois, its local governments and healthcare providers received a total of $52 billion in federal pandemic relief.

The fiscal 2023 budget relies on about $500 million of the remaining $3.5 billion from $8 billion of ARPA aid. Much of the remaining funds are expected to go toward paying off a $4.5 billion unemployment trust fund loan from the federal government that has been accruing interest since September. Negotiations with businesses and other stakeholders are ongoing.

Debt service holds steady at nearly $1.6 billion. The capital budget totals $46.5 billion with most of it being made up of reauthorized existing projects laid out in the state’s 2019 $45 billion program. Another $1 billion of projects tied to ARPA and federally funded state revolving funding as well as $336 million for transportation projects from the three federal COVID relief packages.

The overall figure estimates capital spending of $10.2 billion this year and $11.1 billion in fiscal 2023.

About $1.2 billion in new money GO borrowing would support projects this year with $2.7 billion of GO borrowing expected in fiscal 2023. Another $350 million of sales-tax backed Build Illinois bonds supports 2022 spending and an estimated $700 million is planned next year.

The budget fully funds the scheduled $350 million annual increase in evidence-based formula funding for kindergarten through 12th grade schools and raises spending by another $150 million to $9.7 billion of general funds. The higher education budget receives a $208 million boost to $2.2 billion. Local government revenue sharing programs are maintained at current levels.

Democrats praised the package while Republicans attacked the plan as election-year gimmicky that lacks long-term structural change and could add to the state’s future strains, warning that Pritzker’s plans add $2.5 billion in long-term spending.

“The governor was misleading at best,” said state Sen. Jason Barickman, R-Bloomington. “The concern that I have is that the governor is laying the groundwork for permanent spending increases that are going to straddle taxpayers in future years.

“It’s clear that his budget is filled with one time gimmicks designed to generate good news for voters in this election year,” Barickman said.

Pritzker enjoys Democratic supermajorities in the House and Senate. The spring session is slated to end a month early in April.