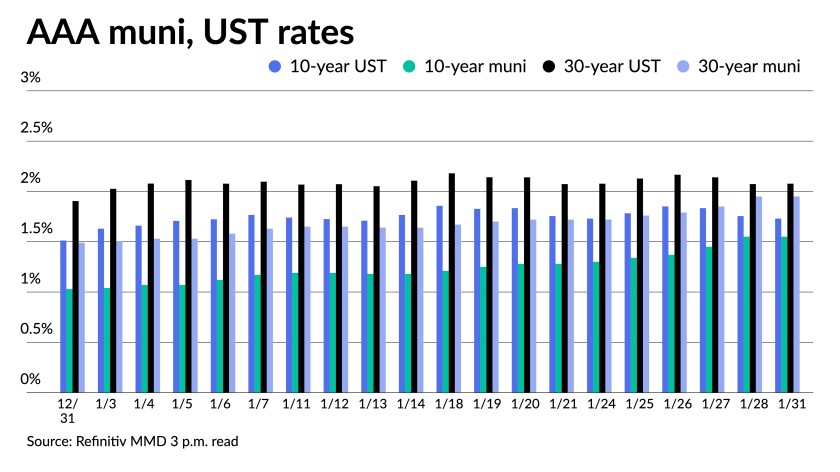 Municipals ended the month in the red but yields rose only a basis point or two on most triple-A scales on Monday while U.S. Treasuries were also softer and equities rallied hard.

Market volatility has led to all municipal bond indexes being deep in the red, seeing the worst performance to start the year since 2018 and the biggest monthly losses since March 2020.

January municipal bond issuance declined 14.7% year-over-year led by a steep drop in taxable and refunding volumes amid the extreme volatility and a rising-rate environment.

Investor bids wanted were roughly 85% above average the past week and remained elevated on Monday. Friday’s bids wanteds just missed the billion mark at $961.96 million after $1.280 billion on Thursday.

Par volume of trading per the Municipal Securities Rulemaking Board showed Friday’s total at $15.053 billion while Thursday was at $14.982 billion. Trading was elevated again on Monday.

Block said spreads on general market names remain tight compared to historical levels, while they are wider for coupons below 5%. Munis are projected to continue to underperform for a few more weeks as markets remain volatile and investors re-evaluate their muni holdings, he said.

Treasuries were weker and equities rallied to end the month.

Are markets expecting too much?
With the Federal Reserve poised to raise rates “soon” and inflation still raging, the market increased its expectations for rate hikes and talk of a 50 basis point increase entered the conversation

“With the economy likely to slow and [as] inflation momentum wanes, the bigger question remains: How fast and by how much can the Fed raise rates without choking off growth or flattening the yield curve?” asked Stifel Chief Economist Lindsey Piegza.

Other analysts have pondered the issue.

“There are clearly many risks to any economic forecast including new variants of the virus, geopolitical concerns and domestic political issues,” said David Kelly, chief global strategist at JPMorgan Funds. “However, one of the greatest risks is that the Federal Reserve turns too active in its new-found zeal to defeat inflation.”

The rise in the consumer price index, he said, results more from supply-chain issues “caused by the pandemic and generous federal government aid.” And these pressures will diminish in the coming months, Kelly said.

While rate hikes are needed to prevent asset bubbles in stocks, housing and speculative investments, he said, “if they instead embark on an aggressive attack on inflation starting with, for example, a 50-basis point fed funds increase that some are predicting for March, they risk precipitating a crash in asset prices and greater weakness in economic growth.”

Weak growth could “interrupt their normalization, which would be particularly unfortunate since it would take many years of steady uninterrupted tightening to actually bring monetary policy back to balance,” Kelly added. “If the Fed fails by trying to fine-tune the business cycle with overly aggressive tightening, it is also those assets with the highest valuations that are most vulnerable. This suggests that whether the Fed forecasts for 2022 turn out to be on the mark or not, the most logical strategy for investors is to focus more intently on valuations and balance in the year ahead.”

Scott Anderson, chief economist at Bank of the West, agreed the Fed needs to be careful.

“The U.S. economy today is hardly a picture of roaring aggregate demand growth that must be tamed ASAP,” he said. Pointing to the decline in consumer spending growth in the past half year, Anderson warned, “there is a real danger of the Fed overdoing it on the monetary tightening front, just as the economy is naturally slowing down, fiscal stimulus is unwinding, and financial conditions are about to tighten.”

Given the lag in monetary policy, he said, “the danger of the Fed overdoing it is high, especially if they decide to raise interest rates by more than a percentage point this year.” Especially at the start, he said, it makes sense for the Fed to proceed slowly and gauge “the reaction of markets, consumers, and prices to somewhat tighter monetary conditions.”

While rising prices and the Omicron variant are cited for consumer confidence declines, Anderson asks, “is the solution really to stomp on the monetary brakes?”

If the Fed raise more than three or four times this year, he said, “the Fed’s inflation problem this year could swiftly become a growth one in 2023.”

But Berenberg Capital Markets Chief Economist for the U.S. Americas and Asia Mickey Levy, a member of the Shadow open Market Committee, said “the Fed is farther behind the rise in inflation than at any time since the late 1970s, and combined with super-tight labor markets, it may be forced to raise rates faster than is currently anticipated in financial markets.”

Even if the Fed raises six times this year and four next year, as Levy forecasts, “that would still leave the real Fed funds rate negative and may not be sufficient to lower inflation and interrupt the wage-price feedback loop.”

Inflation, Levy said, will rise more than the Fed forecasts, with personal consumption expenditure inflation on an annualized basis continuing to gain before receding in the second half of the year. While the Fed expects PCE inflation to fall to 2.6% and core PCE to drop to 2.7% in the fourth quarter, Levy expects both numbers will “remain elevated, near 4%,” with services inflation accelerating, while goods see disinflation or moderate deflation.

Wages are rising and will continue to do so, Levy said, with labor shortages allowing wages to catch up to inflation expectations.

“By any measure, the Fed must raise rates significantly to get monetary policy back toward neutral,” he said. “The real Fed funds rate is deeply negative. The Fed must close that gap.”

It won’t be easy. “The difficult challenge will be to raise rates sufficiently to slow demand sufficiently to interrupt the wage-inflation feedback loop and dampen inflationary expectations, but not too much and generate recession,” he said. “And it must accomplish this task in a polarized Washington political environment and knowing that raising rates will force an adjustment of valuations in financial markets.”

Having waited too long to taper and liftoff, Levy said, “the Fed ought to raise rates aggressively to close the gap between the Fed funds rate and inflation. Even if the Fed assumes inflation will fall to 3%-3.5% as supply bottlenecks dissipate, that would require raising rates quickly to that range.”

Balance sheet runoff “should also be fairly aggressive,” he said, as “moving more slowly would not slow aggregate demand and may fuel ongoing inflationary expectations.”

However, Levy expects the Fed will move slower than he thinks it should. “Based on its experiences and economic performance during the past decade, the Fed has reinterpreted ‘gradual’ to mean much slower rate increases than before the financial crisis, when a rate increase at every meeting was considered gradual and the Fed occasionally raised rates in between meetings,” he said. “The members of the FOMC have a distinct dovish tilt and this will be accentuated when President Biden’s three nominees become governors.”

Additionally, he expects “cross currents from the White House and Congress.” Not to mention the Fed is aware of how it impacts financial markets. “The Fed definitely wants to avoid a monetary tightening that would generate recession.”