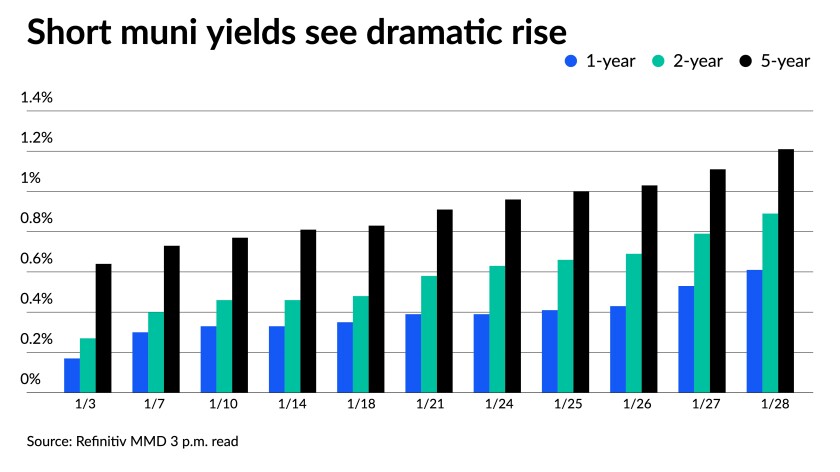 Municipal yields rose double digits Friday bringing levels to highs not seen since early April 2020. The short end of triple-A scales has risen more than 30 basis points over the past five sessions on elevated selling pressure and overall market volatility.

Despite most investors predicting a difficult year, market volatility across all asset classes has shocked the majority of investors, according to Barclays PLC.

“While they have adjusted from a historical perspective, they are not overly cheap, just closer to fair value,” Barclays strategists Mikhail Foux, Clare Pickering and Mayur Patel said. “The front end has been under the most pressure, and we actually are starting to see more value in shorter-dated bonds for more defensive investors.”

If there is continued market volatility and fund outflows, Barclays said, longer-dated bonds might struggle.

“We are especially cautious on longer-dated lower coupons bonds, which have already underperformed 5% bonds by 5-10 bp in the past month or so, but there is probably more downside as rates move higher, especially for long-dated 3% bonds.

“Overall, we feel that investors should be able to find some attractive opportunities in the near future. We would not be rushing to buy, but even at current levels some market participants should start slowly adding exposure,” they said.

“If issuance starts picking up, we could see more market pressure,” they said. “However, after a stretch of time that featured poor valuations, we think we are starting to see some attractive opportunities in the coming weeks and months.”

“For the time being, we stay on muni curve flattening and emphasize the long end of the muni curve,” they said. “Should the Treasury curve flatten to such low levels, it may be a time to re-evaluate the curve position.”

The new issue calendar is about $8.07 billion with $6.274 billion of negotiated deals and $1.793 billion of competitive loans.

The largest deal of the week comes from Rayburn Country Securitization with $908.3 billion. Other notable deals include the Triborough Bridge and Tunnel Authority, Virginia Small Business Financing Authority, the Black Belt Energy Gas District, New York Liberty Development Corp. and the Department of Airports of the city of Los Angeles, California.

Treasuries were slightly better and equities rallied near the close.

Preparing for tightening
Despite most analysts expecting four or five Fed rate hikes this year, and balance sheet reduction, expect volatility, but the municipal bond market should still do well.

“The muni market has a history of outperforming Treasuries when the Fed hikes because the tax-free interest that munis pay becomes more attractive as yields rise,” noted Ann Ferentino, portfolio manager at Federated Hermes. “While we expect muni to Treasury ratios to rise with the Fed moves, if the policy actions go at a measured pace, munis still should be well positioned relative to Treasuries.”

While there could be bumps along the way, Ferentino said, “we expect the asset class to deliver reliable income streams and diversification throughout 2022.”

And while recession isn’t imminent, said Liz Young, head of investment strategy at SoFi, investors “are not conditioned for this environment and I don’t think the digestion process is over.”

“A treacherous bear market” is not in the cards she said, but when market relationships “dislocate” as they did last year, she said, “I start to sense something ominous on the horizon.”

Recently, those “relationships have started to make more sense,” she said. “That tells me this needs to happen to bring us closer to rationality, and to set us up for the next phase of the economic cycle.”

Economists were expecting a 1.2% rise.

“While still blistering, the quarterly increase was more restrained than Q3’s 1.3% gain,” said Wells Fargo Securities Senior Economist Sarah House. “That may tamp down fears of a wage-price spiral amid signs businesses are not upping pay at such a frenzied pace.”

With the gains slowing, Fed officials are likely “breathing a bit of relief that labor costs did not accelerate further on a sequential basis,” she said, “but glad they have telegraphed a more hawkish path for policy given that the overall pace of employment costs continue to point to a very tight labor market.”

But the improvement does not signal “the worst is over when it comes to labor cost growth,” House warned. “Amid an already tight labor market and the Omicron wave dealing a setback for the labor supply outlook, wage pressures are likely to remain firmly upward over the next few quarters.”

While deceleration this quarter was broad based, the construction, trade and transport sectors were exceptions, Sonola said.

The report shows “an economy grappling with high inflation and the emergence of the Omicron variant of COVID-19,” said Erik Lundh, principal economist at The Conference Board. “We expect these data to worsen in January due to the spike in Omicron infections this month. Although, as this latest wave of COVID-19 passes we expect consumer spending growth to improve as spring approaches — particularly for spending on in-person services.”

After the Fed raises rates, said Grant Thornton Chief Economist Diane Swonk, “one has to wonder how well those wage gains will hold up.” In the past 20 years, information was “the only sector that came close to those kinds of wage gains.”

Consumer spending declined 0.6% in December following a 0.4% increase in November as the personal consumption expenditures price index rose 0.4% in the month and 5.8% for the year. The annual gain, up from 5.7% in November was the biggest jump since 1982.

“Consumers pivoted back into services, including travel, tourism and health care over the month as they opted to see their loved ones instead of buying traditional holiday gifts,” said Swonk. “Spending on goods of all types contracted over the month.”

Omicron could tamp spending in January, she noted.

“Inflation is beginning to bite and suppress spending and consumers’ assessments of the economy,” Swonk added. “Federal Reserve Chairman Jay Powell delivered a much more hawkish tone at the press conference following the FOMC meeting. It is past time; panic within the Fed’s ranks has begun to set in. The challenge now is to tamp down inflation without allowing the flame on the overall economy to go out. There is no road map for doing this after inflation has surged.”

Consumer sentiment slipped in January, with the University of Michigan’s consumer sentiment index falling to 67.2, its lowest level since November 2011, from 68.8 in mid-January and 70.6 in December.

Inflation poses biggest threat to IIJA rollout: U.S. DOT official
Mortgage demand is now roughly half of what it was a year ago, as interest rates move even higher
Sam Bankman-Fried provides bailouts, ‘Bitcoin dead’ searches soar, and debate over hidden themes behind BAYC continues: Hodlers Digest, June 19–25
How They Closed It: Closing The Loop On One Of Aspen’s Most Expensive Deals Ever
Here’s why this housing downturn is nothing like the last one