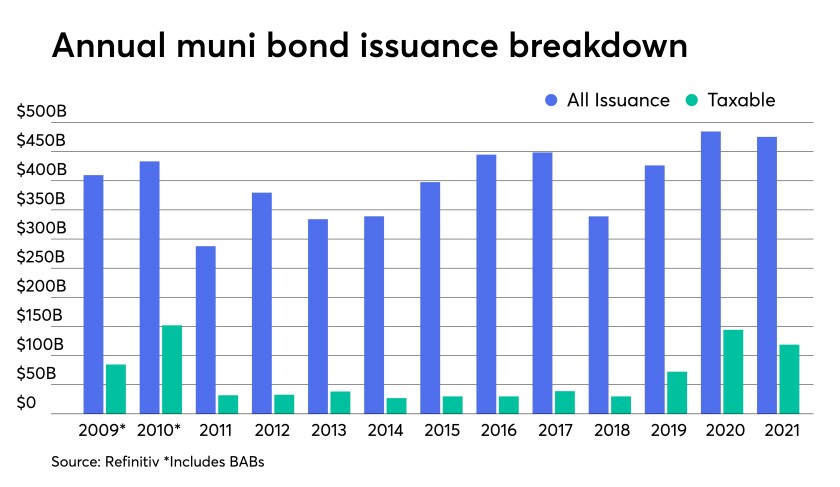 While supply did not meet some market participants’ expectations, many in the industry still consider the figure a remarkable feat for state and local governments as the COVID-19 pandemic continued to disrupt economies, supply chains, healthcare systems, travel and entertainment industries — life — around the world for a second year.

“It’s not as high as last year. I know everybody wants more, and it to be higher, but this is very impressive,” said Erin Ortiz, managing director of municipal research at Janney Montgomery Scott LLC. “It’s the second-highest year on record. We’ve firmly been issuing well above $450 billion of debt for the municipal market.”

Another consideration is that private placements, corporate CUSIPs, and direct bank lines of credit are not factored into consensus figures of total outstanding “muni” debts.

The sentiment that pervaded the industry — more so from buy- and sell-side participants — was that supply is lacking. But it was not so much a factor of less supply but much more so an intense demand from a changing investor base for the asset class.

Municipal bond mutual funds have taken a larger chunk of munis in 2021 — about $84.5 billion of holdings per the Investment Company Institute through Dec. 22 — while retail, bank and insurance company positions have fallen.

Retail has moved into a more professionalized management system via registered investment advisors and separately managed accounts while banks and property and casualty insurance companies have stopped investing in exempts because of 2017 tax-law changes or they moved into taxable munis for the same reason.

Washington’s and the Federal Reserve’s role has also altered the market, with various knock-on effects for issuer behavior.

“Total issuance for 2021 shaped up to be very close to what we expected after the American Rescue Plan Act propped up municipal credit,” said Tom Kozlik, head of research and analytics at HilltopSecurities in reference to the $350 billion that was doled out to states and their localities, plus various industries, such as airports, directly affected by COVID.

It brought real federal dollars to aid issuers in a time when many investors thought government coffers were going to end up empty. The credit picture for munis changed dramatically — positively — as a result.

When lawmakers in Washington earlier in September floated the return of tax-exempt advance refundings and a potential return of a direct-pay bond program, the industry exploded with high hopes of a new era in the muni market.

Some firms said those proposed tax law changes and bond provisions included in the original $3.5 trillion package would have shifted the demand components for and the makeup of the muni market in dramatic ways in the coming decade. Ultimately, some suggested, it would have led to half the market being taxable.

None of those provisions came to fruition.

Without those bond programs and new tax increases, issuers came forward with more deals in November and in December, knowing that, at least in the near term, those programs were not returning and selling debt at the current remarkably low interest rates made more sense.

“I thought the [December] number would have been closer to the recent average of $30 or so billion, and we ended up seeing a little more,” Kozlik said. “This could be a signal that next year’s activity overall could continue on an upward trend as well.”

The jump in issuance in December stemmed, in part, from the availability of more information, including important governmental decisions around infrastructure and the Fed’s approach to rate hikes in the upcoming year, Ortiz said.

For those who want to take advantage of taxable advanced refunding opportunities, Ortiz and Kozlik said December and the coming months would be a good time to do it.

Rate hikes are almost certain in 2022, which could perhaps spur issuance to be quicker at the start of the year, according to Ortiz.

“There is a higher likelihood that we’ll have greater than typical issuance in terms of issuers feeling as though that the right rate hikes will be coming, and they may feel pressured to issue refundings sooner rather than later in the year,” Ortiz said.

Going into 2022, issuance should continue on a similar path to 2021. Municipal bond supply projections for 2022 are at a bullish high of $550 billion from BofA Global Research to a bearish low of $390 billion from Morgan Stanley & Co., but a majority of the firms reporting anticipate less issuance in 2022 than the $484 billion record hit in 2020.

The figures suggested are predicated on various factors, such as the new infrastructure law, interest rate expectations and monetary policy (somewhat clearer now), global economic recovery and future tax policy (still unclear), leading to a broader range of forecasts than in the past. Citigroup Global Markets, for example, is expecting $520 billion, down from their $550 billion 2021 forecast while Vanguard puts its at $400 billion.

Some strategists say the Infrastructure Investment and Jobs Act’s $550 billion of direct federal funding will encourage more bond volume while others say it may curtail issuance. The rollout of the IIJA will dominate the infrastructure sector next year as states and cities position themselves to take advantage of the $1.1 trillion package the White House touts as a once-in-a-generation investment in the nation’s roads, bridges, broadband and transit. But risks loom, industry experts warn.

COVID-19 is less an X-factor in fiscal planning for states and localities since tax revenues have come in far better than expected and the influx of federal aid is still being distributed, many credit analysts say.

“There are a whole host of reasons to believe that municipal bond issuance will materially rise. The combination of these factors, which are mostly positive in nature, is the core theme of our forecast,” Kozlik said of HilltopSecurities’ $495 billion figure.

“U.S. policymakers jumped to action in 2020 and 2021 in the form of aggressive monetary and fiscal policy. Most significantly, the results from their activities will carry over in the form of an outsized rate of U.S. economic growth and positively impact municipal bond market issuance next year,” Kozlik said in his forecast.

But a more tangible — or less, depending on the day — X-factor for municipals is federal tax policy in 2022. The version of the Build Back Better agenda the House passed in November is dead, but Kozlik and others say it’s possible lawmakers could negotiate a different version, potentially with some tax provisions that may benefit the muni market, whether via higher taxes or the (very) slim possibility of certain muni provisions the industry has long-sought, such as those direct-pay bonds and the return of exempt advance refundings.

Analysts and issuers themselves do not have their hopes up too much for the latter. It is still too early to say what will happen with tax policy and what will be included at this point.

What is relatively certain is the supply and demand imbalance will continue into 2022, despite the influx of issuance. Kozlik said there is demand for taxable and tax-exempts that just can’t be satisfied at the pace of current and expected issuance.

“And if we get another $100 billion of fund inflows, then we actually need $360 billion of new-money to keep current investors whole,” Fabian said. “That’s the trick, the rotation, the fact that last year the net buying pressure coming in from the funds and other places and the natural reinvestment demand exceeded the amount issued. New-money last year and this year was up, but still less than what is needed. The market continues to burn off existing investors.”

In the states, California, as usual, led all others.