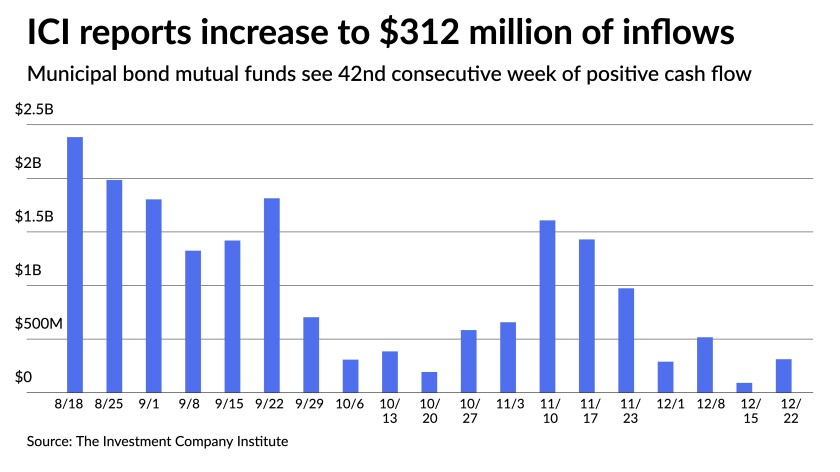 Municipals saw some pressure on long rates as U.S. Treasuries sold off and equities made gains.

The Investment Company Institute reported $312 million of inflows into municipal bond mutual funds in the week ending Dec. 22, up from $91 million in the previous week.

It marked the 42nd straight week of positive flows into the long-term funds and brought the total inflows for this year above $84 billion.

Exchange-traded funds saw a larger uptick in inflows at $808 million after $569 million of inflows the previous week.

Inflows into mutual funds and exchange-traded funds have declined in recent weeks, in line with seasonal patterns. With predicted Jan. 1 reallocations, a Municipal Market Analytics report said things might quickly turn around, “notably in favor of municipal ETFs.”

Dealer inventories increase in anticipation of a supply lull
The usual December inventory build produced dealer carry levels exceeding an average of $20 billion — little more than half of a typical supply month — between 2016 and 2018, noted Kim Olsan, senior vice president at FHN Financial.

She noted the current yield set, with the 10-year AAA holding just above 1%, and uncertainty around early 2022 markets, has led to slower inventory turnovers. Federal Reserve data show that dealers are carrying an average of $14 billion this month, up from $9 billion a month during all of 2021.

An example of a static mindset this month is the fact that the 10-year AAA Refinitiv MMD yield has not moved at all — stuck at 1.03% since Nov. 30 — while other benchmark 10-year AAAs have shown a similar trend. “Market returns have been driven by coupon payments this month as a result, up 0.15%,” Olsan said.

Olsan laid out the recent historicals on dealer carry and January performance.

“Depending on circumstances at year-end, returns in the following month of January have been mixed as dealers committed more capital,” she said. “Following the election in 2016, markets adjusted to a risk-off mindset, benefitting generic municipals as January 2017’s market gain was 0.50%.”

A similar scenario played out in 2018, as the market selloff in October moved the 10-year AAA to the 2.75% area, “generating brisk year-end business with better entry points and creating an opening for January to post a 0.75% return,” Olsan said.

In 2017, dealer inventories surged to an average of $27 billion through December ahead of tax reform taking hold in 2018. Market returns were pressured a month later, when a generic index lost 1%, she said.

A “stingier yield set” late in 2019 drew lower dealer commitments, but strong demand for munis forced yields to test the 1% area. That led to a near-2% gain for the market in January 2020.

“During a volatile 2020, end-of-year trading reflected a reduced inventory profile, with dealers holding an average of $7 billion during December,” Olsan said. “Returns were not compromised, though, with a main index gaining 0.65% this past January.”

Forward-looking performance for the upcoming month “suggests participants more or less comfortable with fundamentals driving a positive result,” she said.

“Dealers seem to be acknowledging this looming challenge,” he noted.

Even when year-end loading of variable rate demand obligations are excluded, data for the week of Dec. 15 reveal the largest dealer investment in product since mid-March 2020, at $15.7 billion.

“We cannot yet call this a full re-engagement, however, seeing as the jump in dealer holdings of VRDOs above $3 billion on Dec. 8 was followed by a spike in the SIFMA index, including an 11 basis points print last week, likely aiming at putting bonds back in investor hands,” Fabian said.

The average seven-day simple yield for the 150 tax-free and municipal money-market funds sat at 0.01%.

Taxable money-fund assets gained $31.84 billion, bringing total net assets to $4.571 trillion in the week ended Dec. 27. The average seven-day simple yield for the 778 taxable reporting funds was steady at 0.01% from a week prior.

“Our investor confidence index fell by its widest margin as the Omicron variant emerged as a new threat to mobility and commerce at a time when inflation was reaching global peaks and central banks began to more aggressively signal a willingness to tighten policy to address rising prices,” said Marvin Loh, senior macro strategist at State Street Global Markets.

The index measures investor risk appetite, so the drop “reflects a smaller portion of portfolio holdings dedicated to risky investments,” he said.

The index for Europe fell more than the one for North America or Asia, probably due to many countries adopting “stricter mobility rules right before the holidays,” Loh said. “The declines in North America and Asia were more muted, either as additional COVID restrictions were limited, or stricter measures were already in place.”

As more becomes known about Omicron’s impact, “we may see a bounce back in investor confidence as witnessed by recent strength in equity valuations,” he added. “Having said that, the tightening bias of many of the largest central banks will continue to prove a headwind to confidence as we start the year.”

“There was less pending home sales action this time around, which I would ascribe to low housing supply, but also to buyers being hesitant about home prices,” NAR chief economist Lawrence Yun said. “While I expect neither a price reduction, nor another year of record-pace price gains, the market will see more inventory in 2022 and that will help some consumers with affordability.”

Treasuries sold off while equities were mixed.