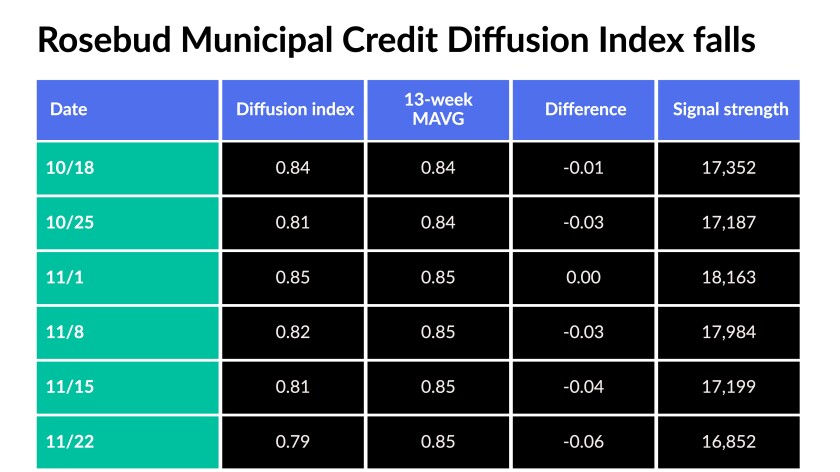 Municipals were very lightly traded, particularly out long, giving little direction to triple-A benchmark yields and leading to another day of outperformance of the asset class to the volatility in U.S. Treasuries and equities.

Triple-A benchmark scales were mixed with Refinitiv MMD leaving its scale unchanged, while IHS Markit, ICE Data Services and Bloomberg BVAL saw one basis point cuts. More pressure on UST emerged on the long end — the 30-year back above 2% — while scant trading in the muni market led to outperformance there.

The $17 billion pre-holiday new-issue calendar sparked demand and trading, but secondary follow-through trading activity was slow, last week falling to its lowest level since mid-August, according to a Municipal Market Analytics report.

“This reasonably reflects the excess of demand instead of its absence,” the report said, that combined mutual fund and exchange-traded fund inflows have jumped back above $2 billion in the last two weeks, and fund NAVs are all at reliable “if uninspiring versus equities” year-to-date gains.

That influx of fund flows has begun to outstrip the supply of tax-exempt paper again. Year-to-date estimates of tax-exempt bonds is about $200 billion to $225 billion.

But compared to the $238 billion of tax-exempts that have matured or been called, and the muni mutual funds and ETFs have pulled in $100 billion of fresh money, “an epic mismatch of demand versus supply” hangs over.

Thanksgiving has halted new issuance this week, but thin trading flows might allow for outsized volatility if concerns develop in a bond-unfriendly fashion, the report noted.

The index, and its 13-week moving average, have now remained below the 12-month trend line of the Municipal Credit Diffusion Index for seven weeks. Signal strength fell in the most recent week to 16,852.

“The strength of the positive signal has bottomed over the last three weeks while the negative signal strength has continued to decline,” said Christopher Mier, founder of Rosebud Strategies. “This results in a declining Credit Diffusion Index.”

Treasuries were weaker and equities were mixed.

Economy
With the leadership questions mostly answered, the Federal Reserve must figure out what to do about inflation. The markets expect the Fed will have to raise rates sooner than planned, and perhaps speed up taper to do so.

The Federal Open Market Committee has hawks, doves and moderates, so there doesn’t seem to be a consensus at this time, while Chair Jerome Powell preaches patience. Of course, with President Biden expected to add three likely doves to the mix, that could slow down possible rate hikes.

“For the time being, the fact that 5-year/5-year forward inflation expectations remain well-anchored tips the scale in favor of the doves,” Ryan Swift, U.S. Bond Strategist at BCA Research writes in a strategy report. “If 5-year/5-year forward inflation expectations remain stable during that period, the Fed will wait until its ‘maximum employment’ goal is met before lifting rates.”

But should the 5-year/5-year forward TIPS breakeven climb above 2.5%, he writes, “the committee will move quickly toward tightening to stave off” a wage/price spiral.

BCA expects inflation to cool and the 5-year/5-year forward inflation expectations will remain below 2.5%, and liftoff will happen in December 2022.

The Federal Reserve Bank of Philadelphia’s nonmanufacturing survey showed activity in the sector expanded fast in November than in October, as did employment, but prices received climbed, while prices paid slipped to a still-high 64.6.

In special questions, respondents see their prices rising 4.0% in the next year (up from 3.8% when the question was asked in August), while employee compensation costs are expected to grow 5.0% (up from 4.0%). Forecasts for inflation grew to 5.0% from 4.5%

The Richmond Fed’s manufacturing index showed expansion slowed slightly, but expectations are for improvement in the months ahead. While employment and wages grew in November, skilled workers were often tough to find, according to respondents.

The price indexes both fell, but remain at elevated levels.