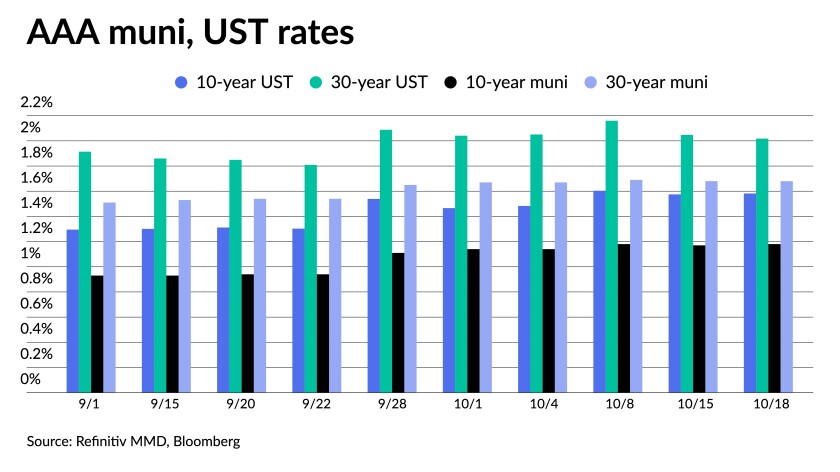 Municipals were a touch weaker 10 years and in on thin trading while U.S. Treasuries pared back earlier losses the curve flattening continued.

Triple-A benchmarks saw one basis point cuts in spots inside 10-years while the five-year U.S. Treasury hit a high of 1.154% and the 30-year pared back earlier losses to land at 2.018%.

Pietronico noted his firm believes the one- to three-year area of the municipal yield curve will be the best performer in the coming weeks as supply moves higher and the Federal Reserve begins to taper its bond purchases.

“Most likely, investors are seeing their statements from last quarter and pulling back a little,” he said.

With ratios backing up significantly from historic lows and spreads widening slightly, there is a good opportunity for investors to restructure portfolios more advantageously, according to Roffo.

“Even with the decrease in inflows there is still significant cash on the sidelines to purchase new issues that present value,” he said. “This has been proven [last] week as large deals priced cheaper than they would have been a couple of months ago, were well subscribed for with little or any balances left over.”

The aggregate total of all municipal securities, including municipal bonds, long-term and short-term notes, and commercial paper, fell 6.6% versus August totals. On an annualized basis, municipal CUSIP identifier request volumes were down 1.3% through September. For muni bonds specifically, there was a 9.9% decrease in request volumes month-over-month, but they are up 3.1 % on a year-over-year basis

“The three-month decline in municipal identifier request volume is definitely a trend to watch,” said Gerard Faulkner, direct of operations for CUSIP Global Services. “Municipal issuers were tapping the debt markets at a strong pace for much of 2020 and the first part of 2021, but that pace has now fallen off considerably.”

CUSIP identifier requests for the broad category of U.S. and Canadian corporate equity and debt climbed 3.3% versus August totals. The increase was driven largely by an increase in requests for domestic corporate debt identifiers. On a year-over-year basis, corporate CUSIP request volume rose 0.1%

In late trading, Treasuries were softer as equities were mixed.

Economy
Treasury yields should remain below average levels for quite some time, one analyst said.

“Given the obstacles the pandemic has produced, it is difficult to envision yields reaching even average levels in the near future,” said John Gentry, senior portfolio manager at Federated Hermes. “Consistent strong growth and growing inflation expectations would be required to push longer yields appreciably higher.

But, Wan and Beath said, they don’t expect the rise “to be a straight line.” They see “consolidation and even pullbacks” resulting from political and economic events.

While investors have been keyed on growth expectations more than inflation concerns, “that could be changing,” they said. “Even so, over the longer term, we believe that bonds will continue to offer diversification benefits and should be held at allocations that are aligned with risk tolerance.”

In data released Monday, industrial production declined 1.3% in September after a downwardly revised 0.1% dip in August, while capacity utilization fell to 75.2% from 76.2%.

Economists polled by IFR Markets expected production to rise 0.2% and capacity use at 76.5%.

The decline reflects “production bottlenecks as manufacturers fall further behind healthy gains in product demand,” said Berenberg chief economist for the U.S., Americas and Asia Mickey Levy. The drop sets industrial production back below its pre-pandemic level, he said, underlining the various problems facing an array of manufacturing sectors.”

Part of the drop can be attributed to weather, said Wells Fargo Securities Senior Economist Tim Quinlan and Economist Shannon Seery. “While Hurricane Ida is partially to blame, accounting for nearly half of the decline, we cannot chalk up all of the weakness to its harsh effects,” they said. “Severe supply constraints are limiting the pace of production and are showing little sign of meaningful improvement.”

“Supply chain disruptions will continue to deplete inventories,” said KC Mathews, chief investment officer at UMB Bank. “This may impact consumption; consumers that are willing and able to spend can’t if items are not on the shelf.”

And while this will remain an issue for GDP this year, he said, “the issue is clearly transitory. As bottlenecks are resolved and inventories restored, spending will resume in the near future.”

Also released Monday, the National Association of Home Builders’ Housing Market Index jumped to 80 in October from 76 in September. Economists expected the index to hold at 76.

“Builders are getting increasingly concerned about affordability hurdles ahead for most buyers,” NAHB Chief Economist Robert Dietz said. “Building material price increases and bottlenecks persist and interest rates are expected to rise in coming months as the Federal Reserve begins to taper its purchase of U.S. Treasuries and mortgage-backed debt.”

Separately, the New York services sector grew “modestly” in October, while prices continued to climb, and employment improved, according to the Federal Reserve Bank of New York’s Business Leaders Survey.

Respondents expect improvement in the next six months.