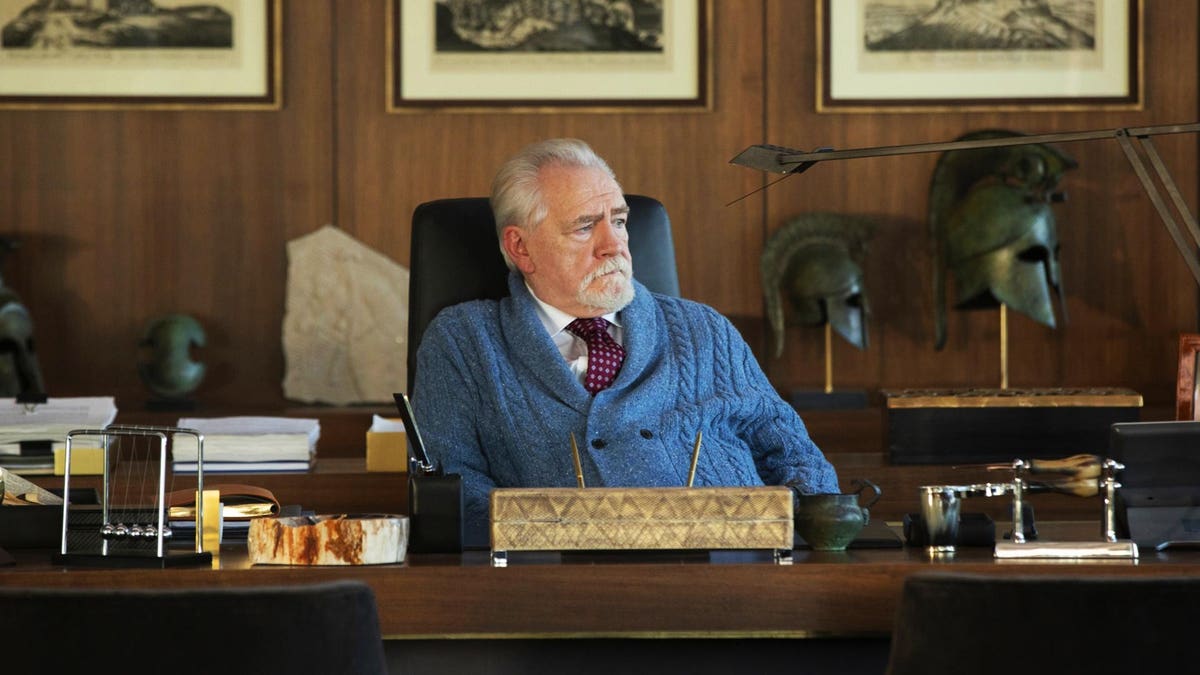 Days after his son Kendall’s explosive press conference left the media conglomerate Waystar Royco teetering on the brink, the Roy family patriarch opens up as he goes to war with his children, his shareholders and potentially the U.S. government.

It’s been a tumultuous 48 hours for Logan Roy. The 84-year-old media mogul welcomed Forbes into his fictional Hamptons estate—at $200 million, the most expensive property on Long Island—still jet lagged after returning from a week aboard his 279-foot, $130 million superyacht, Solandge, off the coast of southern Croatia. He’s been in the spotlight ahead of the premiere of the third season of Succession, the hit HBO documentary about his family, on October 17. A pivotal shareholder meeting in two weeks’ time will decide the fate of a proxy battle that could oust him from the board of Waystar Royco, the publicly traded, $46 billion (market cap) media and entertainment giant he founded in his 20s. Disastrous congressional hearings recently cast more light on a scandal in the company’s Brightstar Cruises division, first reported by New York Magazine, that involved decades of wrongdoing including hush-money payments to women sexually assaulted by former company executives.

And then, only a few hours before he was set to return to Waystar’s headquarters in New York, came an unexpected dagger in the heart: A bombshell press conference by his son and former heir apparent, Kendall Roy, accusing him of covering up the Brightstar scandal.

“The truth is that my father is a malignant presence. He was fully personally aware of these events for many years and made efforts to hide and cover up,” said Kendall Roy, Waystar’s former co-Chief Operating Officer, at the press conference. “My father keeps a watchful eye over every inch of his whole empire, and the notion that he would have allowed millions of dollars in settlements and compensation to be paid without his explicit approval is utterly fanciful.”

Logan Roy admits to Forbes that his immediate reaction to the exposé was a four-letter expletive not fit for print. But the Scotland-born magnate remains undaunted: Roy is confident he can prove to shareholders (and the feds) that his son’s words are not to be believed. He’s set to appoint a new CEO, ending years of turnover at the top. In fact, Roy thinks he can take Waystar, currently the fifth-largest media company in the world, to even greater heights.

“In three or four years’ time, there will only be one legacy media operation left,” says Roy, adjusting a spotted magenta tie beneath a steel gray cardigan as the sun catches his silver hair. Looking out beyond his wood-paneled office to the 42-acre grounds outside, he outlines his vision for the future: “Well, I say, let that be us. One firm left, last man standing. We’re gonna be the number one media conglomerate in the world.”

The stakes of the family feud couldn’t be any higher. Forbes put its crackerjack team of fictional wealth investigators to the task of calculating Logan Roy’s net worth, estimated at roughly $18 billion. The vast majority of that comes from his 36% stake in Waystar, worth $16.4 billion. He’s already lost a chunk of the firm thanks to his divorce from Lady Caroline Collingwood: the English noblewoman and mother to Kendall, Roman and Siobhan owns 3% of the firm, worth about $1.4 billion.

Beyond the Waystar Royco stake, the Roy empire includes at least $345 million in real estate across New York, England, Malibu and New Mexico, $50 million in planes and helicopters, the $130 million yacht and a 50% stake in Scottish soccer team Hearts. Forbes also conservatively estimates the Roys hold at least $1 billion in cash and other investments.

Commenting on the extent of Logan Roy’s power, his longtime friend and Waystar Royco’s former COO Frank Vernon called him a “pal to prime ministers” and “a truth-teller to presidents.” Vernon’s successor (and Logan’s youngest son), Roman Roy, was more blunt: “He can do whatever he likes. He’s like a human Saudi Arabia.”

Born in Dundee, Scotland in 1937, Logan Roy soon left his rainy hometown for the Canadian province of Québec, where he and his brother Ewan were raised by their aunt and uncle. Both were small-time entrepreneurs—his uncle ran a print shop and owned some advertising billboards, while his aunt owned a herd of cattle—and Logan followed in their footsteps, starting out with buying newspapers. Over time, he built those into a global news business with broadsheets and TV networks in 50 countries.

But trouble started brewing in the mid-1980s, when Logan was looking for ways to raise money to expand into theme parks. He resorted to taking out a $3.25 billion personal loan with the Industrial and Commercial Bank of China (ICBC) through the family’s holding company and secured it against his stock in Waystar. Tucked away in the loan’s conditions was a provision that allowed the bank to pursue repayment of the loan in full if Waystar’s stock price ever hit $130 per share.

As long as the good times were rolling, that condition didn’t matter: Logan’s expansion into theme parks was a financial success, generating a lucrative new division for Waystar alongside resorts and its traditional news side, which was taking off as its right-wing cable network, ATN, and salacious tabloids, including the New York Globe, attracted millions of viewers and readers.

“We give them a bit of a laugh, some decent TV to watch,” says Roy, hitting back at accusations he fueled polarization through ATN’s slanted coverage. “News that doesn’t talk down to them.”

By October 2017, Waystar was struggling under the weight of the loan, a fact unknown to its shareholders. Then Logan Roy suffered a stroke and Kendall was installed as acting CEO, sending Waystar’s stock price plummeting to $140—dangerously close to the $130 mark that would allow ICBC to seize a sizable chunk of the family’s shares.

With the debt obligation looming, Kendall enlisted the help of his college friend and private equity investor Stewy Hosseini, who injected $4 billion into the ailing Waystar in exchange for a 10% stake and a seat on the company’s board. Hosseini’s stake—actually owned through a set of shell companies by his backer, rival media tycoon Sandy Furness—is now worth $4.6 billion.

Upon Logan’s return home from the hospital—if not to full health, if reports of his urinary incontinence at the office are to be believed—the patriarch reclaimed the mantle of power. Kendall fought back, leading a hastily-organized vote of no confidence that crumbled in a 5-4 defeat, resulting in his father banishing him and his three co-conspirators from the board.

While at his sister Siobhan Roy’s wedding at Eastnor Castle, the family’s 19th-century estate in the United Kingdom, Kendall then served Logan with a hostile takeover bid. Backed by Hosseini and Furness, the offer stood at $140 per share for the family’s stake, or roughly $14.3 billion. But in a shocking turn of events, Kendall publicly withdrew his support for the takeover at the last minute. Hosseini and Furness then launched the proxy battle that’s still raging today.

“I saw their plan, and Dad’s plan was better,” Kendall said at the time. Now, after publicly recanting his father, he has a very different opinion of his old man’s leadership:​​ “The dinosaur is having one last roar at the meteor before it wipes him out,” he told Forbes.

Siobhan Roy, back at her father’s side after a brief stint advising the presidential campaign of Democratic Senator (and mortal Roy enemy) Gil Eavis of Pennsylvania, had a prompt retort to her brother’s patricidal behavior: “Sometimes I think you just need a good old-fashioned dinosaur cull.”

It’s unclear how Logan Roy—or anyone else, really—can turn around the lumbering Waystar, even if it survives the Brightstar Cruises investigation. Logan’s most recent gambits, a stalled $4.9 billion bid for 70 local TV stations and a failed $25 billion merger with publicly traded news outfit Pierce Global Media, haven’t worked. Neither did Kendall’s $140 million all-stock acquisition of buzzy digital news brand Vaulter, which is now a zombie content farm after the editorial staff was laid off en masse.

Still, Logan Roy isn’t bowing down. Besieged by activist shareholders, external critics and now his own children, he’s forging ahead with his imperial ambitions for Waystar Royco. Gazing at the Corinthian bronze helmets arrayed behind his desk, he says: “Four more years, we’re Procter & Gamble of the news.”

Valuations were based on information in seasons 1 and 2 of Succession, along with real world research based on real estate values and stock market prices. Representatives for HBO and the Succession production staff accepted questions from Forbes about the Roy family’s net worth and assets, but did not comment as of press time. For the valuation of Waystar Royco, Forbes used the average of two stock prices shown in the show, in Season 1 Episode 3 and in Season 2 Episode 2. We also took note of references to the family’s stake in Waystar and the company’s market capitalization. Tom Beadle, media analyst at UBS, also consulted on the valuation of Waystar Royco. The value of the Solandge yacht was provided by yacht valuation experts VesselsValue.