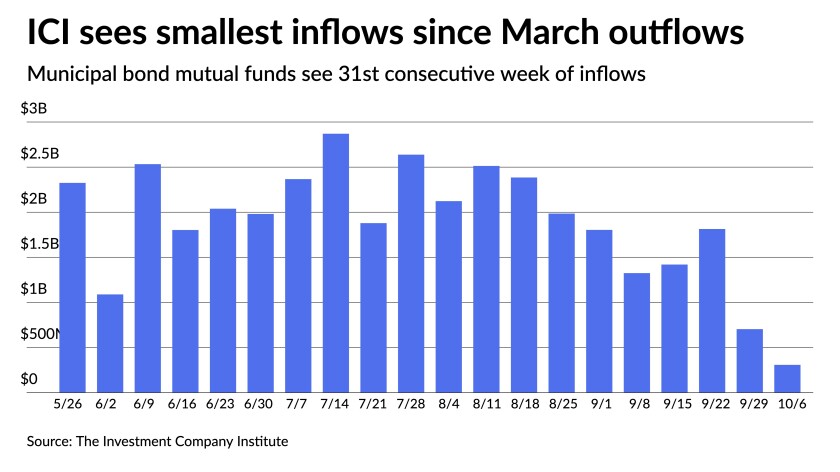 Municipals were steady in light secondary trading while new issues were repriced to lower yields and U.S. Treasuries made gains after a rollercoaster day.

Another round of inflows was reported from the Investment Company Institute — the 31st consecutive week — but they came in at $308 million for the week ending Oct. 6, the lowest figure since outflows were reported in early March and down from $704 million the week prior.

Secondary trading slowed Wednesday — down 35% from Tuesday’s levels — as the focus was squarely on new-issues, but there was more two-way flow activity.

“One of the by-products of market volatility and higher rates is an intermittent period of more active secondary market trading with institutional investors eager to put money to work,” said Jeff Lipton, managing director of credit research at Oppenheimer Inc. “In this arena, value buying can be achieved with certain participants assuming a more discerning presence as spread opportunities present themselves.” Lipton noted as of publishing his report midday Wednesday that trading had slowed.

As the muni market advances to year-end, Lipton suspects “the value trade will be sought after, and even with the potential for further high-yield outflows, opportunities within select sectors such as transportation, special tax, and hospitals may present themselves.

“While market technicals are shifting, they should still provide an offset to rate volatility and throughout the foreseeable future, we can expect a stable credit environment to reveal some rather compelling risk-reward considerations,” he said.

Lipton said ratios would need to move higher “to offer fuller value opportunities,” but year-to-date, “ratios now seem to be allowing institutional buyers to invest for greater value as opposed to just putting cash to work.”

“The tentative retail investor is now in a better place to capture more attractive yield,” Lipton said. “If ratios return to their longer-term averages that are much closer to 100%, cheaper valuations with wider spread may very well enhance performance potential.”

In late trading, Treasuries were better as equities were in the black.

FOMC minutes
If and could were featured words in the minutes of the Sept. 21-22 Federal Open Market Committee meeting, with the panel suggesting that if it decides to announce a taper at its next meeting, purchases could begin to be reduced either in mid-November or mid-December.

Of course, all discussion was couched in the disclaimer “if progress continued broadly as expected, a moderation in the pace of asset purchases may soon be warranted.”

The plan would be to cut Treasury security purchases by $10 billion a month and mortgage-backed securities by $5 billion, ending all purchases in the middle of 2022. “Participants generally commented that the illustrative path provided a straightforward and appropriate template that policymakers might follow, and a couple of participants observed that giving advance notice to the general public of a plan along these lines may reduce the risk of an adverse market reaction to a moderation in asset purchases,” the minutes said.

However, several members wanted purchases cut quicker, and no decision was reached.

The minutes showed some division about labor market improvement, with some concerned about the labor participation rate, while many concentrated on the continued improvement in employment since the last meeting.

“A number of participants assessed that the standard of substantial further progress toward the goal of maximum employment had not yet been attained but that, if the economy proceeded roughly as they anticipated, it may soon be reached,” the minutes said.

Others, looking at the overall employment situation since December 2020, felt the standard had been met.

“Some of these participants also suggested that labor supply constraints were the main impediments to further improvement in labor market conditions rather than lack of demand,” and further “policy accommodation at this time would not address such constraints or that the costs of continuing asset purchases might be beginning to exceed their benefits.”

Earlier in the day, the consumer price index rose more than expected on the headline number while the core was below projections.

“There is no doubt that Americans are feeling the effects of higher food and gasoline prices, but a main cause of these increases is the surge in demand as the pandemic is winding down,” said Cato Vice President and Director of the Center for Monetary and Financial Alternatives Norbert Michel.

“Expansionary monetary policy has not been the main driver of these price increases, and it is likely that contractionary monetary policies would worsen the economic situation,” he said. “Just as important, more expansive fiscal policy will likely worsen inflation.”

The report, which showed CPI up 0.4% on the month and 5.4% year-over-year and core 0.2% and 4.0% higher, respectively, indicating perhaps, “we may not be past the inflation heatwave just yet,” said David Kelly, chief global strategist at J.P. Morgan Asset Management.

“This report will likely reaffirm the Fed’s plans to begin tapering in the coming months, especially as supply chain pressures show little signs of abating,” he said. “However, while wages have strengthened this year, higher consumer prices are eroding Americans’ buying power.”

And, while stagflation fears are erupting, Kelly said, “we continue to expect inflation to tame in the coming months, and together with still robust progress on the labor market recovery, the economy looks far from its state during the 1970s stagflation.”

But others disagree. “We reiterate our view that inflation is accelerating as the print would have been significantly worse without a few volatile categories — apparel down 1.1%, used cars down 0.7% and airfares down 6.4%,” said Jay Hatfield, portfolio manager at Infrastructure Capital Advisors.

“Inflation is not about to quietly fade away,” said Wells Fargo Securities Senior Economist Sarah House. “Rising costs for basic items such as food, energy and housing were behind September’s gain, making the increase particularly painful for consumers.”

Wells expects inflation will remain high in the near future, with the headline number staying above 5% on an annual basis through the first three months of 2022, and above 2% for the year.

“How many more 4% inflation prints do policymakers need to see before they acknowledge higher prices are persistent?” asked Dustin Qualley, senior portfolio manager at Build Asset Management. The numbers suggest it will be appropriate for the Fed to “in the next couple of months,” he said.

The Health and Educational Facilities Board of the Metropolitan Government of Nashville and Davidson Counties in Tennessee ((/A+//) is set to price $113.365 million of educational facilities revenue and improvement bonds (Belmont University), Series 2021, serials 2022-2051. Truist Securities.