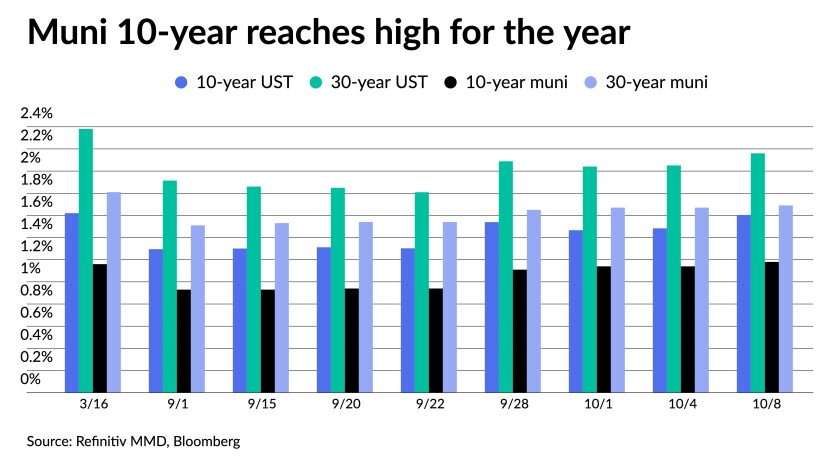 The municipal 10-year triple-A bond hit a high for the year Friday at 1.18%, beating the yield reached in the March selloff.

Municipals were weaker Friday, playing catch-up to another day of U.S. Treasury losses as participants await an $8 billion calendar and a more uncertain market sentiment with the pullback from mutual funds hanging overhead.

Coming off more than two weeks of a backup in rates, triple-A benchmarks ended one to two basis points weaker, but outperformed Treasuries on the week.

“It was no surprise that rates volatility had a spill-over effect on the muni market, with tax-exempts continuing to underperform Treasuries until almost the end of the week,” Barclays strategists wrote in a weekly market comment. “Until rates stabilize, we see a somewhat challenging trading environment ahead for the asset class.”

Aside from the front end, “ratios have adjusted meaningfully higher from levels reached earlier this year, but in a historical context, they are still quite rich — the average ratios between 2017 and 2019 were 62% for five-year; 81% for 10-year and 95%, for 30-year maturities — still easily 5-15 ratios above current levels,” strategists Mikhail Foux, Clare Pickering and Mayur Patel said.

The 10-year spot, which was rich for some time, “has finally cheapened, underperforming the front and long ends.”

“Investors likely have a lot of cash ready to deploy at higher yields and ratios, and even though fund flows have been slowing since late summer,” they said, noting that while there were outflows from high-yield muni funds for two weeks in a row, “we do not view this as a major threat to the market because, in our view, any slowdown in inflows will likely be temporary, although the high-yield market might be affected a bit more.”

Because the 2- to 10-year curve steepened by about 15 basis points, it makes extending from shorter bonds into the 10-year range more attractive, according to a market note from Appleton Partners.

Over the course of 2021, taxable issuance has accounted for about 24% of total new supply, down somewhat from an elevated 30% in 2020.

“While the percentage is slightly lower this year than last, it remains high by historical standards and has effectively reduced the buying universe for tax-exempt debt,” they noted.

Triple-A Texas Water Development Board will bring $365.775 million of exempt state revolving fund bonds on Wednesday and the calendar is peppered with more green and sustainability bonds.

In late trading, Treasuries were softer as equities were mixed.

Will Fed still taper?
The weaker-than-expected nonfarm payroll report will not stop the Federal Open Market Committee from announcing it taper plans after its November meeting, experts said, but it does make the debate more vigorous.

Just 194,000 jobs were added in September, despite expectations of economists polled by IFR Markets for 460,000, although the August number was revised up by 130,000.

“This jobs report sure doesn’t make the Federal Reserve’s job any easier,” said John Farawell, head trader and EVP at Roosevelt & Cross. The upcoming FOMC meeting should be “really interesting.”

Employment is not the Fed’s only mandate, said Wilmington Trust Chief Investment Officer Tony Roth and Chief Economist Luke Tilley. “The Fed also has concerns about inflation and financial stability, and their quantitative easing purchases will not do anything to fix a labor shortage.”

This will lead to “intense debate” at next FOMC meeting, they said, and while “It is likely they start the taper at the November meeting, we would not be surprised if they delay just to ensure the labor market recovery is not weakening too much.”

By waiting until the December meeting to announce a taper, FOMC members would get to see two additional employment reports. “A situation where they taper in November and the labor market continues to weaken is the worst-case near-term scenario for them,” Roth and Tilley said.

They expect the next jobs report to be stronger. “Our high frequency data through Oct. 4 is showing a much better picture so far, with the best growth since July 2021.”

Calling the added jobs “adequate,” Edward Moya, senior market analyst for the Americas at OANDA, said it paves the way for a formal taper announcement next month. “This report further cements the Fed’s view that tapering does not start the countdown for interest rate hikes.”

And, should the October report also be weak, “Wall Street might become more skeptical of any rate hikes happening at the end of next year,” he said.

The Delta variant “stymied” the labor market recovery, Moya said. Despite added unemployment benefits ending and schools reopening, employment remains stalled. “Wage growth is still impressive, but that is not of primary concern as many of the lower-paying jobs have still yet to come back.”

The report was “mixed,” said Marvin Loh, State Street global macro strategist, “with another subpar result raising questions over the strength and composition of the post-pandemic jobs market.”

“The expectation that the end of enhanced employment benefits would bring people back into the workforce remains elusive,” he continued, “with the accommodation and food services sector adding just 31,000 jobs, slightly better than the 11,000 contraction from last month, but overall a disappointment given the number of open positions in the category.”

But despite a “disappointing” tone, Loh said, “we do not think this jobs report changes the Fed’s taper schedule, which will still likely be announced in a few weeks. We think that the threshold to not announce taper is relatively high, and while there is less clarity on the job market than hoped, signs of wage inflation remain as the FOMC is showing increased signs of concern over rising prices.”

Brian Coulton, Fitch chief economist, agreed. “Overall this looks like a ‘decent’ enough labor report to allow the Fed to proceed with the taper in November.”

So how will the Fed view this report? The Payden & Rygel economics team says, “It’s difficult to say.” While Fed Chair Jerome Powell wanted another “reasonably good” report, this seemed short. But, Federal Reserve Bank of New York President John Williams said he prefers to look at “accumulated progress,” and by that definition, “substantial further progress” may have been achieved.

“Still, two weaker-than-expected reports in a row give us pause,” they said. “The deceleration in job growth from earlier in the year has been pronounced and have not yet returned to pre-COVID levels.”

At the rate of gains since July, they said, “it would take until February 2024 to close the gap and achieve anything close to ‘maximum employment.’ But with elevated consumer prices and a litany of concerns about production bottlenecks, policymakers on the margin seem antsy about asset purchases. So perhaps the tapering timeline remains on track, but the rate hike timing will be delayed.”

Given the weakness in the report, Bryce Doty, senior portfolio manager at Sit Fixed Income Advisors and Sit Investment Associates, said, “The question becomes what will it take for there to be more workers again? The obvious and politically painful answer is that it needs to be less attractive to not work.”

Pointing to the drop in the unemployment rate to 4.8% from 5.2% in the previous report, he said, “The only way that number can decline when so few jobs are created is by many people simply leaving the workforce.”

State Street’s Loh said it still remains to be seen when the labor market will return to pre-pandemic levels and whether COVID-19 forever changed “the employment landscape.”

But it will take time, more than first thought, to answer those questions, leaving the Fed “to address the possibility of above-average inflation during a period when the employment market may be structurally changing.

“In our view, this is a risk to the relatively aggressive hiking schedule implied by the Fed dots and the markets, that may result in a longer period between tapering and the start of rate hikes,” Loh said.

The Health and Educational Facilities Board of the Metropolitan Government of Nashville and Davidson Counties in Tennessee ((/A+//) is set to price $113.365 million of educational facilities revenue and improvement bonds (Belmont University), Series 2021, serials 2022-2051. Truist Securities.

Jessica Lerner contributed to this report.