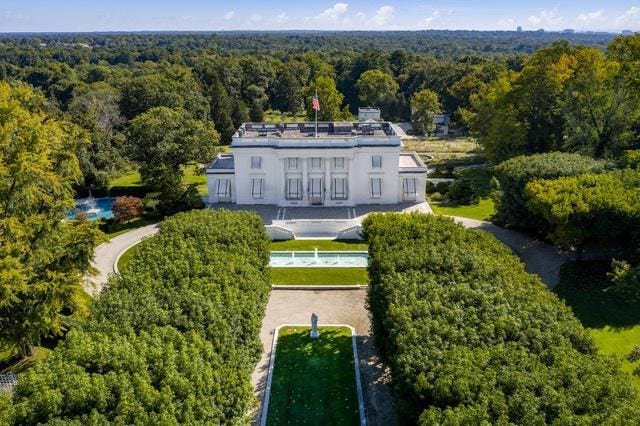 Built in 1910 in Greenwich, Connecticut, Petit Trianon Deux is a faithful copy of the original Petit Trianon, built between 1762 and 1768 by King Louis XV for his long-term mistress, Madame de Pompadour. Upon his accession to the throne in 1774, the 20-year-old Louis XVI gave the Versailles château and its surrounding park to his 19-year-old Queen, Marie Antoinette, for her exclusive use and enjoyment. She used Petit Trianon not only to escape the formality of court life, but also to shake off the burden of her royal responsibilities.

Petit Trianon Deux, also known as Northway, was built on 18.3 parklike Greenwich acres by Laura Robinson, an heir to the Goodyear Tires fortune. The current owner and seller is Reverge Anselmo, former US Marine and film director of Stateside. Featuring extraordinarily high ceilings and the neoclassical formality of the original, the American Petit Trianon Deux has the impressive architecture of its namesake while providing the amenities wanted by today’s homeowner.

These include nine bedrooms, six full and two half bathrooms and a garage large enough for over five full-sized cars. There is a swimming pool, as well as a reflecting pool with a fountain. A clay tennis court, 1913 stables with groomsmen quarters, an exquisite greenhouse with a potting shed and a carriage house meet the needs of every passionate tennis player, equestrian or gardener. There is a wine cellar in a grotto, a library, a wonderfully designed guest house and a magnificent divided staircase leading up the front façade.

An allee of 60-foot sculpted American Sweetgum trees frame the long, impressive approach, leading to the reflecting pool with its fountain and the divided staircase to the entrance.

An architectural treasure known for its symmetry, this has long been locally identified as the “White House.” If you want to know more, call the listing brokers, Janet Milligan and Joseph Barbieri of Sotheby’s International Realty – Greenwich Brokerage.