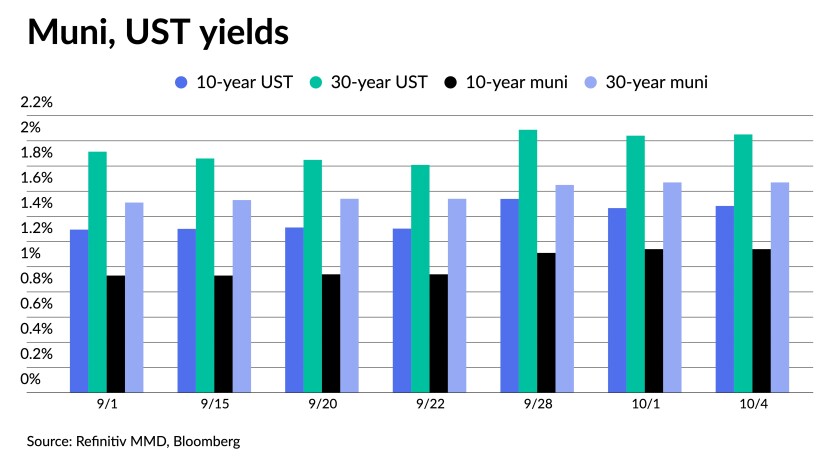 Triple-A municipal benchmark yields were steady to a touch firmer as the market awaits a sizable calendar led by a large taxable Alabama general obligation deal and a diverse set of credits from airports to charter schools to utilities.

Even as taxables and refundings took a back seat to new-money tax-exempts throughout August and September, their presence is growing on the forward calendar as issuers who may have been waiting for Washington to once again allow advanced refundings saw that possibility fade quickly.

Taxables make up 30% of the calendar this week and more deals are being added daily. As many strategists have said, placing taxable issuance should be no problem with the broader investor base from foreign and corporate investors; however, investors seeking tax-exempts will be left wanting.

The combination of more taxables and fewer tax-exempts could help keep levels steady again even as redemptions are fewer than in the summer months.

Buy-side take
As the fourth quarter officially began Friday, demand remains heavy, and many on the buy-side are awaiting upcoming investment opportunities as issuance grows.

The evidence of strong demand, he said, is being seen mostly in the primary market, where investors will see about $9-plus billion this week.

“New-issue deal placement has seen some noted improvement last week as compared to the prior week, with deals being bid with more spread and more competitive deals are showing zero syndicate balances,” Lipton said.

“Primary issuance will continue to be absorbed through the balance of the year as technicals hold in, yet certain issuers will remain fixated on health policy directives and political uncertainty which may impact marketing decisions,” he added.

“Its been a long time since portfolio managers heard from underwriters that they are having issues getting deals done,” according to John Mousseau, chief executive officer and director of fixed income at Cumberland Advisors, noting that could forecast some potential weakness going forward.

“I think anything that smells like bargain yields compared to a few months ago” will be in high demand, Mousseau said.

His colleague, Shaun Burgess, portfolio manager and analyst at Cumberland, agreed there is a more constructive tone on the municipal side than on their taxable counterparts.

“We remain cautious in the face of [recent volatility] as well as increasing supply as we head into the fall,” Burgess said.

“We are keeping a careful eye on fund flows and demand as we head into another robust calendar to help derive some sense of directionality in the municipal space,” he said.

In late trading, Treasuries were flat as equities were off on the day.

Will holiday sales be robust?
Supply shortages and higher prices have impacted consumer spending recently, but analysts are now looking to the holiday spending season to see whether shoppers will fuel an economic bounce.

Consumer spending is a large part of gross domestic product and the holiday season is one key contributor.

As the number of vaccinated individuals increases and economies continue to open, “expect shortages and inflation to stay longer,” said Sit Investment Associates senior portfolio manager Bryce Doty. “While supplies of goods and services will increase, it will still be no match for increasing demand so we believe shortages are yet to peak. We expect a lot of bare shelves at retailers come Christmas.”

But despite the supply and labor shortages, Wells Fargo Securities senior economist Tim Quinlan, Economist Shannon Seery and Economic Analyst Sara Cotsakis, believe “holiday sales are on track for a record increase in 2021.”

And while the Delta variant and fading consumer confidence could tamp spending, they said, “even if consumers go into hiding, holiday sales are already on track to beat last year’s record performance, at least in terms of the year-over-year percent change.”

Sales could be 10% to 13% higher than last year, they said, with the “key theme for holiday sales in 2021 is to be early. That is as true for shoppers and retailers as it is for producers and shippers, where Santa’s helpers all over the world have been pulling out all the stops to restock depleted inventories despite ongoing supply chain constraints and COVID flare-ups that have kept workers out of factories at times.”

Stimulus checks issued earlier this year, they said, led to a shopping spree, but retailers will need to see that momentum continue as many consumers wait to shop.

On the negative side, they said, rising inflation, and gas prices, may leave consumers short on funds for holiday spending. Also, supply chain issues could mean those who wait may not have much to choose from. Also, they said, “the inflation backdrop and supply shortages mean you can forget about discounting this holiday season.”

Finally, seasonal labor will be in short supply, Quinlan, Seery and Cotsakis said.

Morgan Stanley sees more spending, even after adjusting for inflation, and warns consumers to be ahead of the rush. “Our retail analysts are constructive on consumer spending, and major retailers are expecting a strong holiday shopping season but have warned of limited inventories, longer shipping times, labor shortages, and fewer discounts.”

Because incomes have risen and savings increased since the pandemic began, they said, “spending can overcome price increases.”