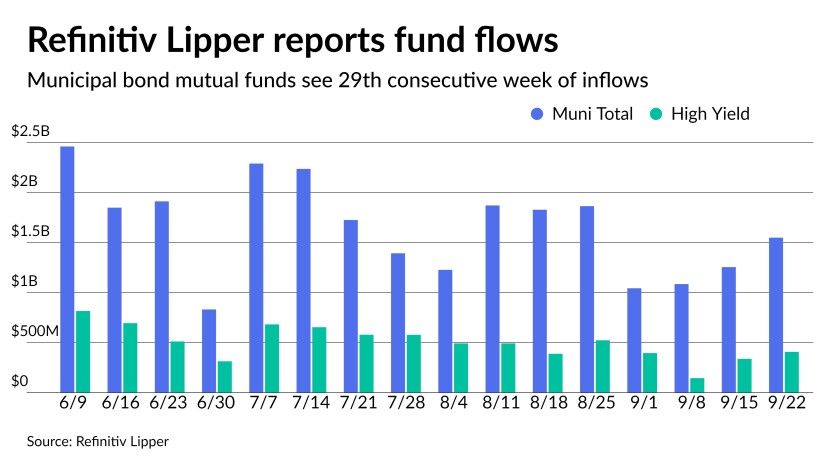 Municipals could not ignore broader markets and triple-A scales cut levels by two to three basis points along the curve, but again largely outperformed a major risk-on trade Thursday that moved U.S. Treasuries to trade off double digits while equities boomed.

Secondary trading showed weaker prints into the early afternoon. Large blocks of benchmark credits — Maryland, Utah, Washington, Georgia — exchanged hands at higher yields with more sellers than buyers on the day, but those who were buying took the opportunity to capture the minor increase in yield. Inter-dealer trading made up 22% of the flow.

Fund inflows continue to be a force in the market. For the 29th straight week, Refinitiv Lipper reported inflows into municipal bond funds. Investors put $1.6 billion of cash into the mutual funds, with high-yield seeing $408 million of that amount.

Thirty-day visible supply has climbed to $14.8 billion. Some marquee names are lining up including $600 million plus of negotiated and competitive loans from the Maryland Department of Transportation, a $300 million-plus competitive sale from the Washington Suburban Sanitation District, Maryland, and $430 million from the Texas Water Development Board. A $1.8 billion taxable deal is slated for the Golden State Tobacco Securitization Corp. Hawaii has $1.9 billion of taxable general obligation bonds on the heels of ratings outlook boosts.

The four-week moving average remained positive at $1.234 billion, after being in the green at $1.313 billion in the previous week.

Fed redux
The Federal Open Market Committee meeting and Federal Reserve Board Chair Jerome Powell’s press conference seemed to narrow opinions regarding tapering, with some analysts looking at what could prevent a November announcement and stirred up the transitory or not inflation debate.

“We believe the only thing that could block its tapering program [from being announced in November] would be a meaningful hiccup in the labor market or geopolitical arena,” said Thornburg Investment Management Co-Head of Investments and Managing Director Jeff Klingelhofer. “In either case, we see this as a high bar for the Fed to delay its tapering plans.”

He called taper “all but certain,” with the Fed “preparing the market for less stimulus, while holding back on any actual tightening until the labor market fully recovers while hoping inflation behaves as expected.”

If the September employment report comes in lower than August’s 235,000 payrolls added, that could delay the taper, said Grant Thornton Chief Economist Diane Swonk. Other issues that could factor into a later announcement, she said, are, “a failure to lift the debt ceiling in Congress, or a meltdown in China stemming from its largest real estate fund, Evergrande.”

For a November taper announcement, “the prerequisite,” said DWS Group U.S. Economist Christian Scherrmann, “will be that hiring activity in September shows the promised upside from the run-off of the extended unemployment benefits.”

Also “clarity on the still looming debt ceiling and possible government shutdown would also be helpful,” he said. “If the shutdown continues to threaten or that threat even escalates, the Fed playbook will most likely be rewritten, with a more dovish twist.”

“This meeting will be looked back upon as the one where the Fed gave up on inflation being transitory,” said Matt Miskin, co-chief investment strategist at John Hancock Investment Management. “They may still say transitory, but actions speak louder than words. That the FOMC members provided an upside in forward rate hike projections in ’22/’23, Powell saying tapering plan to be done through mid-2022, suggest the Fed is moving forward with tightening.”

Thornburg’s Klingelhofer disagrees. “Structural imbalances in the global economy may be the primary disinflationary — if not deflationary — factor behind the Fed’s sanguine inflation outlook,” he said. These imbalances will remain once the COVID pandemic ends, he said.

But even FOMC members disagree about the topic. “The committee members must have had an interesting discussion of temporary vs. persistent and whether the rise in inflation — which has clearly surprised the Fed — is due nearly exclusively to supply shortages,” said Berenberg chief economist for the U.S., Americas and Asia Mickey Levy, who is also a member of the Shadow Open Market Committee.

But the markets also believe inflation will be transitory, said Robert Robis, BCA chief fixed income strategist. “Yet we have seen very strong realized global inflation readings in the August data, beyond the point of maximum base effect comparisons versus a year ago, while supply squeezes and soaring shipping costs are showing no signs of slowing as we approach the fourth quarter,” he said.

“Global bond markets have made a collective bet that current high rates of inflation will prove to be temporary,” he said. “While consensus expectations are calling for some rise in government bond yields in 2022, yields are expected to remain below inflation.”

And those “negative real yield expectations remain the biggest source of vulnerability for global bond markets,” Robis said. “If inflation turns out to be ‘less transitory’ than expected, nominal bond yields will need to move higher to reprice both real yields and the risk of more hawkish central bank responses to sustained high inflation.”

Berenberg’s Levy noted the Fed has “already stretched the definition of ‘temporary.’” While the high inflation this year “has met the Fed’s ‘make up’ requirement following years of sub-2% inflation,” he said, “it is noteworthy that the Fed now projects core inflation to remain decidedly above its 2% longer-run target, and the majority see risks to the upside of this forecast.”

But if price pressures continue, Thornburg’s Klingelhofer said, “the more the market will test the Fed’s assumption that inflation is transitory. With each monthly inflation report showing surging year-on-year growth, the Fed’s path will narrow.”

As unemployment stays above pre-pandemic levels with inflation remaining elevated, he said, “the more uncomfortable the Fed’s position becomes.”

What will be problematic, said John Hancock’s Miskin, is if the Fed suggests “all these rate hikes are going to take place, but the yield curve does not steepen. The 10-year Treasury yield is still just over 1.3%. If the longer end of the curve does not rise, the tightening will eventually result in an inverted yield curve.”

An inversion would signal the late stages of the current cycle. The statement “really was a meaningful advancement of the hawkishness of the June meeting,” Miskin said. “The quicker the Fed tightens monetary policy, the shorter the economic cycle is likely to be. This cycle just got the news it will be aging fast in terms of Fed policy.”

But the Summary of Economic Projections shows “a great deal of dispersion in the individual opinions of the FOMC,” said Marvin Loh, senior global macro strategist at State Street Global Markets. “For instance, the view for 2022 is evenly split with nine members who do not think a rate hike is needed, while another nine think between one and three hikes will be needed.”

In addition, he noted, “the standard deviation of three-year forward expectations amongst the individual FOMC members is rising, an indication of the continued uncertainty of how the economy will evolve after the pandemic. This is consistent with Powell cautioning to take longer-term projections with a grain of salt.”

In data released Thursday, initial claims rose unexpectedly in the week ended Sept. 18, climbing to 351,000 on a seasonally adjusted basis from an upwardly revised 335,000 the week before, initially reported as 332,000.

Economists polled by IFR Markets expected a decline to 320,000.

Economists expected the level to hold at 2.665 million.

Also released, the leading economic index rose 0.9% in August after a downwardly revised 0.8% gain in July, first reported as a 0.9% increase.