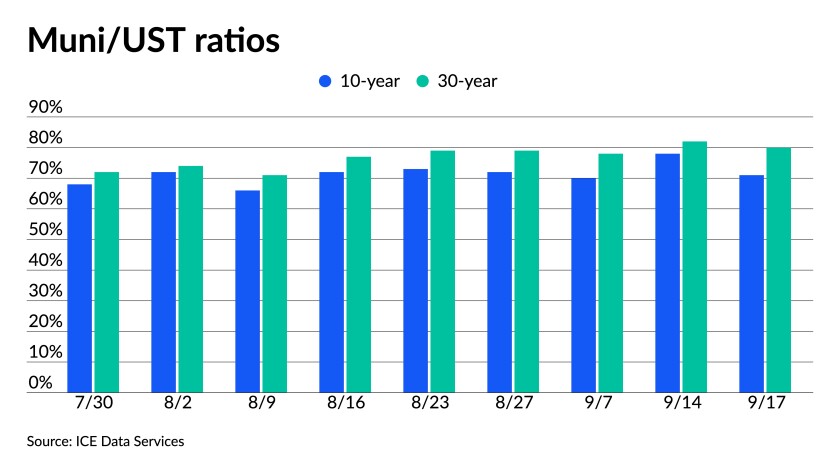 Municipals were a touch softer Friday as U.S. Treasuries rose and equities sold off as global concerns over China and COVID were heightened and participants prepared for the FOMC meeting and potential for tapering next week.

Triple-A benchmark yields rose a basis point beginning in 2028 while UST were off another three to four on the 10- and 30-year. The 10-year UST has risen 9 basis points since Tuesday while the 30-year climbed five since its low on Tuesday.

Municipals have been distracted by the robust primary market and that trend will continue next week when another large new-issue calendar greets investors content to put money to work there, making the secondary market secondary.

The total potential volume is estimated at $9.924 billion with $7.51 billion of negotiated deals and $2.41 billion of competitive loans. Total 30-day visible supply is at $13.22 billion.

The calendar is led by the Triborough Bridge and Tunnel Authority’s $880.54 million MTA Bridge/Tunnels payroll mobility tax senior lien bonds in the negotiated market and nearly $1 billion of general obligation bonds from Massachusetts and $546 million from the New York Thruway Authority in the competitive space.

Rates remain historically favorable from the issuer side, noted Kim Olsan, senior vice president at FHN Financial. She said the low rates set up another $100 billion of new issues between now and the end of the year.

“Consistent fund flows this year have created a cycle of demand that won’t fade, but merely adjust to changing rate scenarios,” she said. “It would likely take a heavy period of supply to force rates over their 2021 highs, which are about 20 basis points away from current levels.”

Despite single-and low-double digit yields, “the FOMC/Tax/Financing Package storyline will hold reluctant interest in short munis — meaning the push for any concession (leading to a strong credit spread collapse) and demand for short calls will remain in play,” she added.

If issuers do pull back on issuance as a result of waiting on the potential for a massive new influx of tools from the $3.5 trillion package being debated in Washington, participants still see an active investor base.

“We expect the next several weeks to be relatively active in the muni space, but, in our view, the asset class is well positioned, especially if supply turns out to be lighter than expected,” Barclays said in a weekly report. “There is a lot of cash on the sidelines, with investors looking to buy the dip. Consequently, even if there is some market volatility, we would view this less as a concern and more as a possible buying opportunity.”

Economic indicators
The University of Michigan’s consumer sentiment index rose 1% to 71.0 in September from 70.3 in August, according to its survey of consumers.

Economists surveyed by IFR Markets had expected the index to increase to 72.0 for the month.

“The steep August falloff in consumer sentiment ended in early September, but the small gain still meant that consumers expected the least favorable economic prospects in more than a decade,” according to Richard Curtin, the survey of consumers’ chief economist.

The index of consumer expectations rose 3.1% to 67.1 in September from 65.1 in August. On the year, the index is down 11.2% from September 2020’s level of 75.6. Looking ahead, consumers could have several potential reactions to inflation, Curtin wrote in a commentary on the report.

“Consumers have initially reacted by viewing the rise in inflation as transitory, believing that prices will stabilize or could even fall in the future. As a result, postponing purchases is seen as a viable strategy. This implies a slowdown of spending in the months ahead and a more robust rebound later in 2022,” he said.

“The main alternative is that inflation will not be transient, but will rise further due to an unprecedented expansion in fiscal and monetary policies,” Curtin said. “The resulting rise in inflationary psychology will lessen resistance to rising prices and stiffen demands for increased wage gains. This reaction takes a long time to fully develop, and is contingent on significant increases in long-term inflation expectations, which have yet to be observed.”

Massachusetts (non-rated) is set to sell $350 million of general obligation bonds consolidated loan of 2021 Series D at 10:30 a.m. on Tuesday.