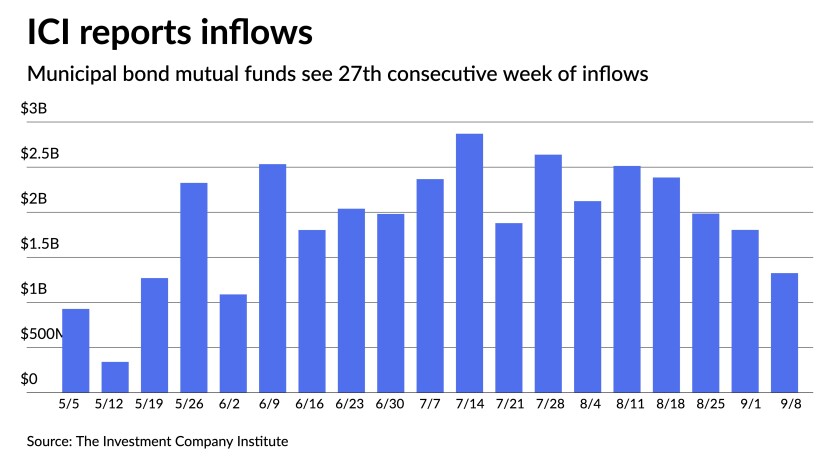 Municipals were little changed on light trading in the secondary again Wednesday as Illinois and Texas priced bonds in the primary and the Investment Company Institute reported another round of billion-dollar-plus inflows.

Exchange-traded funds saw $250 million of inflows after $251 million a week prior.

While falling to the lowest total since June 2, the total for the year is still on pace to near or break the record, $93.2 billion, hit in 2019.

With an up-and-down U.S. Treasury market, municipals have yet to move hard in either direction. Triple-A benchmarks were little changed on the day once again. Ratios hovered at recent levels with the 10-year at 71% and the 30-year at 82%, according to Refinitiv MMD. The 10-year muni-to-Treasury ratio was at 76% while the 30-year was at 81%, according to ICE Data Services.

Over the last 30 days and counting, the 10- and 30-year AAA spots have traded in a narrow four to five basis point range, creating less momentum in either direction, said Kim Olsan, senior vice president at FHN Financial.

“Looking ahead to the end of the quarter, volatility remains a key component,” Olsan said. “A stagnant curve for several months running will likely find a catalyst in Q4 — whether it be driven by stepped up issuance or waning fund flows drawing demand away.”

That has yet to happen, but BlackRock also added to a more cautious tone for the municipal market heading into the final stretch of 2021.

“We maintain a defensive posture over the near term amid rich valuations, tight credit spreads, and less historically favorable supply/demand and interest rate dynamics in the fall,” wrote Peter Hayes, James Schwarz and Sean Carney. “We acknowledge the potential for increased volatility stemming from elevated political, fiscal and monetary policy, and COVID-19-related uncertainties. However, we maintain a favorable view of the asset class over the medium term amid improved credit fundamentals and continued strong demand for tax shelter.”

The firm said it has shifted to a “slightly short-of-neutral stance on duration” within a barbell yield curve strategy.

“We continue to hold a preference for lower-rated credits and sectors that have been more impacted by the pandemic, such as transportation, education, travel-related (hotel tax, airport, etc.) and health care,” they said.

In the primary Wednesday, Illinois and Texas, issuers on the polar opposite ends of the ratings spectrum, priced $143 million and $216 million of general obligation bonds, respectively, in a market that has rewarded both high-grades and high-yield. Illinois saw its 10-year maturing in June price plus-45 to triple-A benchmarks while Texas came with its 5s of 2031 maturing in August at 1.10%, or plus 17 basis points.

The shorter end of the curve, the tighter the spreads with Texas coming with a 5% coupon five-year maturing at 0.51% versus Illinois’ five year, same coupon, at 0.67%.

The average seven-day simple yield for the 150 tax-free and municipal money-market funds sat at 0.01%, the same as the previous week.

Taxable money-fund assets rose by $572.6 million, bringing total net assets to $4.361 trillion. The average, seven-day simple yield for the 760 taxable reporting funds sat at 0.02%, same as the prior week.

Economic indicators
Business activity and employment in New York increased in September as signs the state’s economy was beginning to recover were evident in data released on Wednesday.

The index for the number of employees rose eight points to 20.5 while the average workweek index jumped 15 points to 24.3.

Overall business activity surged too, with the general business conditions index up 16 points to 34.3 last month from 18.3 in August. Economists surveyed by IFR Markets had forecast a reading of 18.0.

Looking ahead, the index for future business conditions was little changed at 48.4, pointing to ongoing optimism about the six-month outlook. The capital expenditures index rose 11 points to a multi-year high of 33.9 while the technology spending index rose 18 points to a record high of 33.0.

Also Wednesday, the Federal Reserve reported that industrial production increased 0.4% in August after rising 0.8% in July.

Economists polled by IFR Markets has expected a gain of 0.4% last month.

Additionally on Wednesday, the Labor Department said import prices fell 0.3% in August after a rise of 0.4% in July.

Import fuel prices dropped 2.3% in August after a 3.0% rise in July. The August drop was the first monthly decrease since October 2020.

The August downturn was mostly driven by lower petroleum prices. Prices for import petroleum declined 2.4% in August, after advancing 2.3% in July.