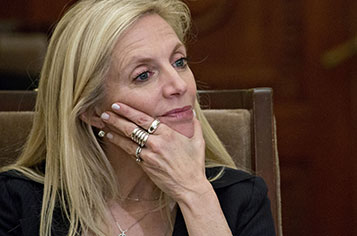 Federal Reserve Gov. Lael Brainard spoke with the Biden-Harris Federal Reserve transition team in January and with the president’s Council of Economic Advisers in May, her calendar shows.

The meeting with the Fed transition team occurred Jan. 8 and included Gary Gensler, who is now Securities and Exchange Commission chairman. Brainard’s diaries were provided to Bloomberg in response to a request and had not been previously released.

Brainard is the only Democrat on the Fed’s Board of Governors in Washington. Bloomberg reported Thursday that Biden advisors are considering recommending her to President Biden as the next Fed vice chair for supervision. That post is currently occupied by Randal Quarles, whose term in the role expires in October. Bloomberg previously reported that Biden considered her for Treasury secretary before picking former Fed Chair Janet Yellen.

Brainard’s diary also shows she has had fluid contact congressional members over the past several months, including Sen. Elizabeth Warren, a Massachusetts Democrat and member of the Senate Banking Committee, to Reps. Maxine Waters and Patrick McHenry, the Democratic chair and Republican ranking member of House Financial Services Committee.

Brainard either sits on or leads nearly every working committee at the Fed board, and her calendar also shows the scope and intensity of her job, including financial-stability calls with the Bank of England to a virtual meeting with the chief executive of PayPal.