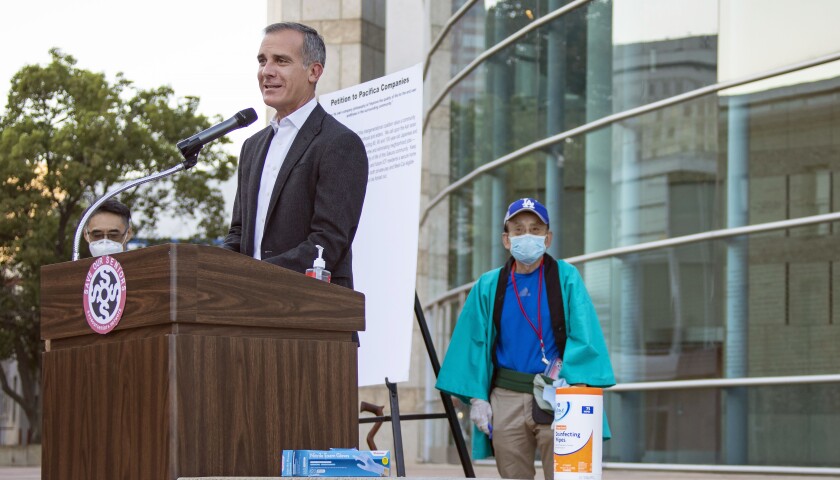 Nine mayors from across the country backed House Speaker Nancy Pelosi’s call for Congress to approve both the Infrastructure Investment and Jobs Act and the $3.5 billion budget reconciliation package.

The same number of moderate Democrats in the House came out Thursday against Pelosi’s approach, saying the House shouldn’t delay passage of the bipartisan infrastructure bill that passed the Senate this week when the social policy budget blueprint included in the reconciliation package could take months.

Pelosi had said she would not move the infrastructure bill until the Senate approved the budget reconciliation bill.

“Mayors see first-hand the struggles of the people they serve, and know the profound impact these dollars will have on their daily lives,” Los Angeles Mayor Eric Garcetti said. “If passed, this reconciliation package will fuel the recovery of our cities and make possible long overdue investments to immediately improve the quality of life for millions of Americans.”

The larger Democratic measure has a more expansive focus on what backers call social infrastructure. On the call, mayors expressed strong support for the budget resolution’s investments that they said will help cities thrive, including investments in housing, child care, community college, and climate action, according to the mayor’s joint statement.

“The Build Back Better plan is a major boost for our efforts to make the economy work better for average American families. The BBB agenda will improve the lives of Americans, many of whom were hurting before the COVID-19 pandemic struck,” San Antonio Mayor Ron Nirenberg said.

The mayors’ statement included eight Democrats and Nirenberg, an independent.

“For America to build back better we must invest in people and reignite the American dream,” said Seattle Mayor Jenny Durkan.

“We must build pathways to family wage jobs that will support and build our future. We must also invest in rebuilding our roads and bridges,” she said.

“Seattle has led the way with two free years of college for our high school graduates and expanded pre-school for our 3 and 4-year-olds,” Durkan said. “The cracked West Seattle Bridge is not just a critical commuting corridor, it is an economic driver for the region with goods passing through the Port of Seattle on their way to or from the rest of our country. To lead the way in the fight against climate change and rebuild our economy, we must prioritize the infrastructure of the future – like clean, rapid transit and electric vehicle charging.”

Florida chamber hypes state’s economic outlook, population growth
The Federal Reserve is likely to hike interest rates again. What that means for you
China sharply rebukes US over decision to shoot down spy balloon
Stocks making the biggest moves after hours: Whirlpool, NXP Semiconductors, UnitedHealth and more
Nashville Estate Loved By Country Music Celebrities Is Up For Absolute Auction