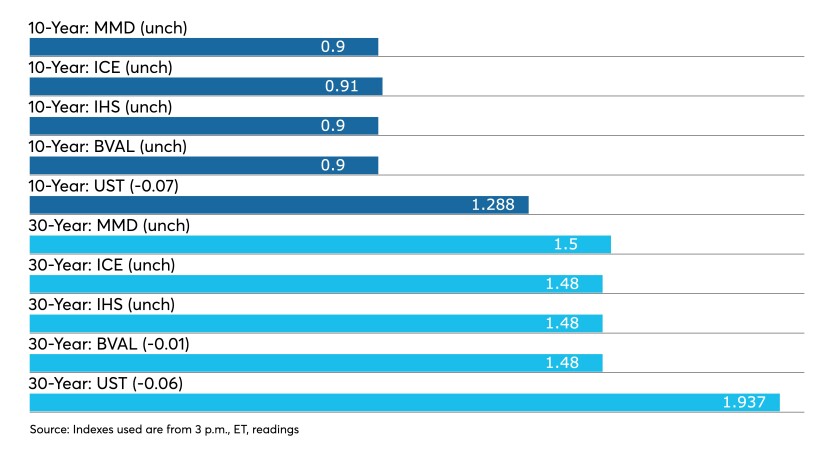 Municipal bonds were little changed to slightly firmer on the short end Friday after a week in which the longer end of the yield curve brought yields back to early July levels, with pressure from more supply and a weaker U.S. Treasury market.

UST yields reversed their negative course with the 10-year falling seven basis points and the 30-year five but munis were mostly flat as participants sat on the sidelines. Municipal to UST ratios were at 71% in 10-years and 76% in 30.

Fitch Ratings moved the city to stable from negative on Friday afternoon ahead of its sale.

“We reiterate our market underperform on New York City’s General Obligation bonds (Aa2/AA/AA-) because current tight spreads are not sufficient compensation for risks to the city’s economic recovery,” according to a report from CreditSights. “The city’s finances are in better shape than expected, despite the pandemic, due to extraordinary federal aid and above-budgeted revenue performance.”

Miami-Dade County, Florida brings the largest ever deal for the Port of Miami with $1.24 billion of seaport revenue and refunding bonds. New Orleans (/A+//) leads the competitive slate with $300 million of exempt and taxable public improvement bonds on Wednesday.

While there was some pressure on yields this week, BofA Securities sees “no sign, or reason, that credit spreads should widen.”

“We see room for more compression to come for the rest of 2021,” strategists Yingchen Li and Ian Rogow wrote in a weekly report. “Macro conditions remain supportive of credit strengthening, and muni market supply/demand conditions provide no room for widening as the pressure is still on the tightening direction.”

“The flatness of A-rated and BBB-rated spreads only indicates that muni investors are probably searching for spread with their new money in other corners of the market, such as high-yield or investment-grade low-coupon bonds,” they said.

Muni CUSIP requests see first drop since January
Monthly municipal CUSIP request volume decreased in July, the first monthly decline since January of this year. The aggregate total of all municipal securities — including municipal bonds, long-term and short-term notes, and commercial paper — fell 18.7% versus June totals. On an annualized basis, municipal CUSIP identifier request volumes were up 4.2% through July. For muni bonds specifically, there was a decrease in request volumes of 18.2% month-over-month, but they are still up 9.9% on a year-over-year basis

“Municipalities have been busy with new debt issuance this year, and while the volume of new requests has slowed this month, it’s important to note that seasonality could be playing a role in the trend,” said Gerard Faulkner, direct of operations for CUSIP Global Services. “June is peak short-term notes season, so it stands to reason that we’d see a tough comparison in July. With interest rates still holding at historic lows and state governments very much in need of cash flow, we expect issuance volume to stay healthy for the near term.”

Economic Indicators
The University of Michigan’s preliminary August consumer sentiment index dropped to 70.2 from the final read of July at 81.2.

This marks the lowest reading for current conditions since 2011.

“After the second highest increase in consumer spending since the 1950s in the second quarter, the surge in COVID cases and concomitant sudden deterioration in consumer sentiment to its lowest level since 2011 threatens to slow what was on track to be the best year of economic growth in decades. Our sense is that while activity is moderating, this one-off report overstates the downside risk,” according to Tim Quinlan, senior economist and Sara Cotsakis, economic analysts at Wells Fargo Securities.

Economists polled by IFR Markets estimated a reading of 81.2 for sentiment. IFR expected current conditions to come in at 88.1 and expectations at 80.3.

“Although there has been a divergence recently between this measure and the comparatively sanguine readings of confidence from the Conference Board, the message here is a direct one: the one-two punch of inflation and a COVID resurgence threaten to disrupt the consumer-led economic expansion,” they said.

Economists anticipated imports to rise 0.6% and exports to gain 0.8%.